-
Sunday is a very quiet day in Paris as most shops are closed and really only the galleries and museums are open. These are often very crowded on Sunday. One near us is the Musée Maillol which is currently holding a Murano Glass exhibition. The history of the museum is quite interesting as it was established by Dina Vierny who was the model for sculptor Aristide Maillol. The exhibition was a variety of modern and museum pieces of glass, some dating back to the 15th century. There is also a permanent collection of sculptures and paintings by Maillol many featuring Mde Vierny. Maillol was a contemporary of Gaugin, Cézanne, Renoir, Rodin, Degas and Picasso and there are a few pieces by these artists there as well. One of the attractions of Paris is the Metro Underground system because not only is it efficient but many of the station entries are beautiful Art Deco structures. You could spend days just going around photographing these so I have included a few. The other Art Deco photo of interest is of part of the Samaritaine Department store. This original store was in 3 buildings between the Seine and Rue de Rivoli, one of the most famous streets in Paris. The buildings have been closed since 2005 and there has been lengthy disputes regarding its redevelopment. Recently plans were announced to make it a hotel/apartments/offices, with a small retail component. Some of it is being used and in fact, the part I photographed has a Zara shop so when Rebecca and Sue went in there to browse and browse and browse, I had the opportunity to take as many photos as the camera will hold. It is a beautiful building so it will be exciting when it is reopened.

The other photos are of our wanderings including a Dior billboard, Napoleon's column and Rebecca outside a very famous, and very expensive, luggage shop which was established in 1853 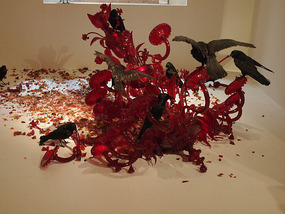 Murano Glass at Musée Maillol
. However, the one photo I would like to point out is the painting we took through a gallery window of famous people including politicians, artists and entertainers – it is fantastic. The names are in the text next to the photo except for the female hanging off the table who we cannot recognnise.

It was my birthday just before Rebecca arrived so we decided to delay the celebrations until she was with us. Now many of you know we love Buddha Bar music and so where else could we go but the actual place. Sue and I had been there during a previous visit but only for drinks. You enter at street level and go downstairs to the mezzanine bar area and then down further to the restaurant. It's all about the atmosphere with a huge Buddha sitting at one end, way-out decorations, low lighting and the expectation that Indiana Jones will come swinging across the roof any minute.

Now regarding the interesting "pink" photos. These were taken by Sue and Rebecca as I was too shy, of course 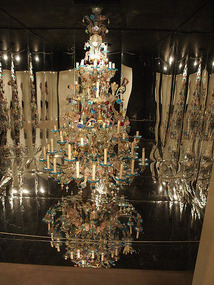 More Glass at Musée Maillol
. This is a new tea and cake shop in Gallerie Royale – Mmmmh.

Of course, we had to take Rebecca to the Palace of Versailles which is the most visited tourist attraction in France. Actually, it was crowded but we managed. What is interesting is that we had the American tourist, then the next big wave were the Japanese and the new ones are the Chinese – and remember there are 1.4 billion of them and they are have no concept of personal space!! The palace is magnificent and a monument to royal decadence. Much of the palace is associated with Marie Antoinette and her husband Louise XVI. They spent a lot of time here and Marie Antoinette even constructed a small rustic village where she could escape from court life. The Palace is huge and many of the rooms have original furniture and fittings. Just as important are the gardens which include ponds, fountains and groves of trees. Many of the fountains were installed by Louis XIV, the Sun King, who tried to build aqueducts to bring water to Versailles from as far away as 100 km (60 miles) which was a total failure and a huge waste of money. We saw a number of these on our travels in the countryside including the one at the Chateau de Maintenon, shown in the blog from June 30th. The grounds also house some smaller palaces worth visiting, the Grand Trianon, built by Louise XIV for himself and his mistress, Marquise of Montespan and the Petit Trianon, built for Louis XV’s mistress, Madame de Pompadour.