-
The weather in Paris for the past few days has been really hot which is not enjoyable without having somewhere to swim. So we decided to get out of the city for a few days and on the recommendation of our friends, Jenny and Gavin, went to Reims which is about 130 km north of Paris in the Champagne region. Our criteria for the hotel search were airconditioning and a pool and we found the Hotel au Tambour which was perfect for us. The most important structure in Reims is its great cathedral where all 25 kings of France have been crowned. The first was Clovis in the 5th century. He was first baptized by St Remi and then crowned as the first Christian King of France. As I indicated in a previous chapter, the kings of France were not necessarily chosen by succession and some of the stories of them getting to Reims to be crowned before a rival is a whole story. The cathedral was pretty badly damaged by shelling in WWI but the damaged sections have been meticulously restored. One of the features of the cathedral are three stained glass windows by Marc Chargall,[ one of our favourite artist]. The city, population 190,000, is quite spacious with wide streets and lots of outdoor spaces.

Being in the region we couldn't miss the chance to go to the heart of the champagne region, Epernay 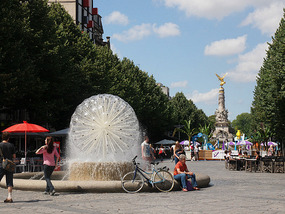 Street Scene, Reims
. Every major champagne house has their headquarters there. The largest is Moet and Chandon but it is very commercial and you need to book ahead to have a tour of their facilities. We took a tour of the Georges Cartier house and saw a short video of the process and visited their storage caves. They have 1.5 km of caves but in Epernay there are 150 km of caves cut into the chalk at a minimum depth of 8 metres and some at about 15 metres. They are at a constant temperature of 11oC (52oF) or lower. The making of champagne is very controlled with non-vintage having to be stored for a minimum of 15 months and vintage champagne for a minimum of 3 years. After the tour, the tasting wasn’t bad either. There are more photos of Reims and Epernay with explanation.

The other important church in the history of French royalty is the Cathedral St Denis which is where most of the kings and other important royalty are buried. It is on the outskirts of Paris and can be reached by the Metro 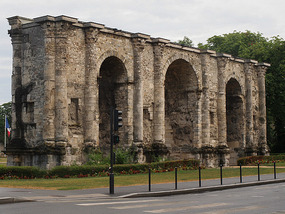 Roman Gate, Reims
. The graves were desecrated during the French Revolution but a lot of the tombstones were saved and returned to the church in the 19th century. After visiting the cathedral in Reims we had no choice but to visit the Cathedral at St Denis in Paris.

The visit was amazing and one of the highlights of our whole trip. The original basilica on the site was built in the 5th century and the current building is from the 12th century and considered the first true Gothic building. It was built by Abbot Suger and some of the windows are original, making them the oldest stained glassed windows in a major structure. Kings and family members were buried there until the French revolution when mobs dug up the bodies and placed them in two common pits outside the church. They remained there until the middle of the 19th century when they were exhumed and as many as possible of the bones returned to their original places in the church. In addition, the bodies of many of the kings buried elsewhere were relocated to St Denis in the mid-18th century 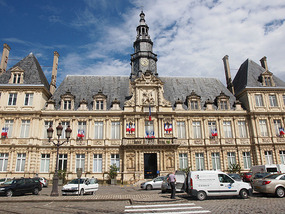 Hotel de Ville, Reims
. After having read so much about French history and learnt a lot on our travels, it was quite moving to see all these graves in one location. Two interesting displays were a glass urn containing the heart of Louis XVII,[ son of Marie Antoinette and Louise XVI], who died at age 10, and a large stone urn which contains the heart and entrails of Charles V. Their identity has been verified by DNA testing. The graves of Marie Antoinette and Louise XVI, who were famously guillotined during the French Revolution are also there as is an 1800 memorial of them praying. There are 33 kings (all but 3 since Clovis) and 45 other royalty buried in the Cathedral.
Other Entries
-

Ok, this one by far caught my greatest interest. You will need to educate me on champagne, but more than that all of the kings. The photographer was very good also in this blog. The rose windows are fascinating. Many Mahalos for send them all my way. I've enjoyed them all but this is the BESTEST
Angels on your day