Tour de France and Our Last Days in Paris

-
As our amazing trip comes to an end, this section starts with some photos of our apartment in Paris. It is in the 7th arrondissement on the left bank. The area is home to the French National Assembly as well as many government ministries, embassies, Musee d'Orsay and the Eiffel Tower. We are also a few hundred metres from Le Bon Marché, a very upmarket department store but also having one of the best food markets you have ever seen. There are also lots of specialty shops, restaurants and cafes so it is a pretty nice area to spend a month in. 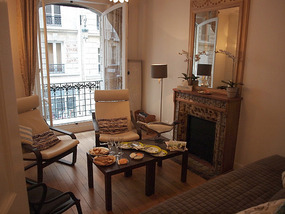 Our Lounge
. These guys have been racing for 23 days covering 3,404 km (2,115 miles) and over some
of the steepest mountains in France. This year was the 100th anniversary of the great race and was celebrated with a twilight finish. Historically the first part of the final stage is fairly relaxed and there is an agreement not to challenge the Yellow Jersey. However, the final few laps of the Champs-Élysées are serious with the sprinters vying for the win. Seeing the riders on the Champs-Élysées was great although I did not realize how fast they actually go even when cruising and so did not have my camera set correctly for the photos. I did get some video and although not that clear, it does show the speeds they are traveling. Even the second video which I slowed to half pace is still too fast to be completely clear. From Australian perspective there were two disappointments, one being our riders did not feature and secondly, the winner was British. They have now beaten us in the rugby, they won Wimbledon, they beat us in the cricket and now the Tour de France 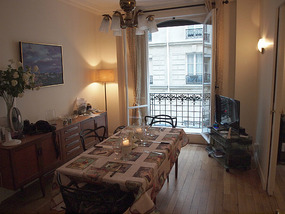 After spending the past 14 days with us, Rebecca took off to Amsterdam and Berlin with her boyfriend, Tom. It has been great having her with us and being able to share some of the sites and sounds of Paris.

The French love the beach and the sun but of course, Paris is a long way from the water. Now Paris get very hot and humid in July and August, so every year the local authorities close off the roads along the side of the Seine and build a number of beaches. Wooden frames are put in place and then hundreds of tons of sand brought in as well as palms trees to give it the correct feel. You can't swim anywhere, especially not in the Seine if you don’t want to get sick, so the people use light spray showers to cool off. Over 4 million people use these temporary free beaches per year. 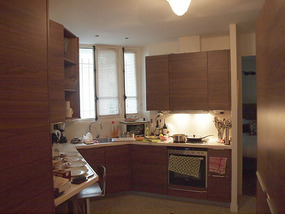 Our Kitchen
.70 per day, The system called Vélib’, has about 18,000 bikes throughout Paris and is extremely popular, especially on the weekends, when nearly all the bikes are used by the locals. An electric car sharing system is also being trialed in the city. Another interesting innovation is that there are little Smart cars available for rent which can be driven around for a GPS-guided tour of the city. Looking at the website it appears to be only in French but I am sure if it takes off, it will become available in other languages.

France was once a colonial power and had a number of colonies in Africa which has resulted in many migrants from these countries coming to France. One of the features when walking around Paris are the wonderful colourful outfits worn by the African women. We photographed a few of these (with permission for the family shot) showing just how colourful they are.

So our trip to Europe comes to an end. It’s been an amazing four months and we have seen and experienced so much. We have enjoyed sharing it with you. This will however not be the last post as there will be two more – one from the US when we visit Chicago and Washington State and then a final surprise.
Other Entries
-

My oh My what a wonderful and vibrant city, Paris. I love your apartment. It looks roomy and quite comfortable. Additionally how nice of the city fathers to provide you with a sandy beach. Did it remind you of home? We are missing you. I am heading back to the Island in about 9 days. I look forward to seeing the two of you with those gorgeous smiles. Angels on your day Jannette