Chicago – A City of Two Faces

-
I had been to Chicago a few years ago and really enjoying it, so we decided to spend some time there together. However, before describing what we did here, there are four photos of our last meal in Paris with Rebecca. It was at a great seafood restaurant in St Germain, the La Bar a Huitres Saint-Germain. Great food and service, wonderful final night. We flew to Chicago with Aer Lingus which was actually pretty good and arrived at our hotel in the early evening and pretty tired. A short walk and a quick meal at the Cheesecake Factory (which we know from Honolulu) was all we could manage. 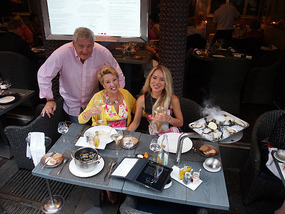 La Bar a Huitres Saint-Germain
description
. The city has some of the best designed high-rise architecture in the World featuring buildings from the 20's and 30’s and well as more modern ones. There are a huge number of different variety and styles and make the Chicago skyline very interesting. The skyline is emphasized as the city and surrounding areas are quite flat. Thoroughly recommend to anyone visiting Chicago that they do a boat trip.

In contrast, to the buildings in the downtown area, by walking around the streets near Lincoln Park, one is able to see lots of classical houses, built in either timber or what they call Chicago grey-brick style. The oldest house we saw was dated 1801 but we are now sure if they were affected by the great Chicago fire of 1871 and are actually more recent than that. Certainly the brick houses shown were built after the fire.

Of course, the other influence on Chicago architecture is Frank Lloyd Wright who spent the first 20 years of his career here 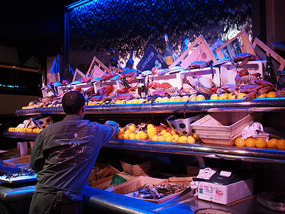 La Bar a Huitres Saint-Germain
. We did a tour of his house and studio in Oak Park where he lived when first married. The house features the timber panelling, stain glass windows and lots of natural light for which Wright was famous. There are also some other Wright-designed houses in Oak Park which can be seen on a walking tour. We also went to his other famous design, the Robie House in Hyde Park and 10 miles south of the city centre – Barak Obama’s house is in this suburb. Robie House is built in the Prairie style which is important as it was the first uniquely American style of architecture, which had previously been just copied from Europe. The house is interesting although only part of it is open for viewing which was disappointing. Also no photos allowed inside which surprised us as we had been allowed to in his other house and studio and the visits are run by the same group.

So why a city of two faces? It's because walking around, there is such a contrast between the old buildings and the new ones, especially the skyscrapers. However, it all seems to fit together to make a very aesthetically pleasing city.