-
We left a very wet, windy and cold Sydney on Tuesday morning and flew to Johannesburg – just over 13 hours. Overnighted at the Airport Hotel and then next morning took the 35 min flight to Polokwane. There we were met but the car that took us to Botswana. It is about a 2 hr drive to the border where we were met by, Kenosi who was to be our guide for our stay at the Main Camp at Matshatu Safari Park. We crossed from South Africa to Botswana by driving through the Limopo River which luckily was fairly dry. 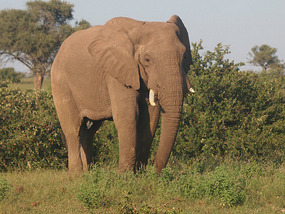 You are driven around in an open Landcruiser over dirt tracks and dry river beds and it is one of the most amazing experiences you can have. The countryside is mainly low shrub with intermittent thick treed areas. It takes a bit of getting used to but after a while you can see the animals quite clearly because they contrast to the general green background.


The easiest to see are the giraffes of which there are lots. Of course as soon as she saw one, Sue immediately stood up, which is not allowed for safety reasons. I think it was after three goes that she finally controlled her excitement and stayed put in the seat.


So what did we see? Nearly everything as you can see from the photos. It is truly amazing but the family of cheetahs and the elephants were the highlights. We did not find the elephants until quite late and consequently got back to the lodge about an hour late. One of the reasons we were late because on the way back we saw a female leopard out hunting but it was too dark to photograph as well as a very large python. More on the leopards later.

We eventually got to our lodge at 6:45pm. We didn't really know what to expect but it is actually as good as the photos we saw. We will put some more of the camp in the next blog.

Oh how exciting! Never been on a safari so I am particularly curious about your trip. The pictures are incredible...good job! Love the accommodations too! Have a glorious time and stay safe. Love you guys and see you soon in Maui.

Aloha to the Traveling Duo: This is simply fabulous. Here I am again living vicariously through you and your photos. Keep missy Sue in her seat and send more photos. Be very careful, and be very safe. Angels on your day, your trip and travels.

Safe travels Sue and Renze on your exciting safari! Looking forward to following your journey!

Incredible photos and thats Day 1! Glorious weather, ground flowers in bloom and prolific wildlife - just perfect. Thanks for the first blog, will be having my own safari experience through yours! All the best, Barb.

I can see Sue jumping up in the Landcruiser and Renze cringing and telling Sue to sit down ! Wow, wonderful slide show. Can relate to our African Safari years back. We still have great memories of such a privileged experience which you no doubt will both agree. Stay safe, John & Julie.

Thank you for including us in your adventures. Very exciting.