-
If you look at the photos accompanying this text, the first few are of the Main Camp at Mashatu Safari Park. We stayed here for 2 nights and as you will see in later blogs, 2 more at the Tent Camp. The main camp is extremely comfortable and has 15 rooms, a swimming pool, restaurant, sitting rooms and a small conference room. While were there, a group of photographic enthusiasts were doing a safari with renowned African wildlife photographer, Greg du Toit – see http://www.gregdutoit.com/ He goes out with them and gives them hints on taking wildlife photos and then they discuss the techniques back in camp. Really nice guy and quite happy to talk to amateurs like me as well.


A typical day while at Mashatu is as follows:

You wake at 5 am and meet your ranger at 5:15 for coffee and a biscuit before heading off as soon as possible – in the pitch dark 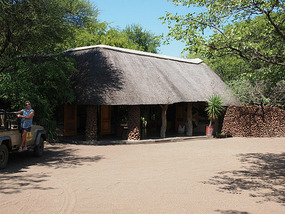 Main Camp
description
. There are 4 – 6 people in each vehicle as well as a ranger and a tracker. The morning safari finishes back at camp at 9:40 and there is brunch at 10am.

You meet again at 3pm for "high tea" and then take off again. This evening safari finishes any time between 6 and 7:30pm depending on what is around. In both safaris, you stop for coffee/tea and a comfort break – literally behind a bush!!!

So for this second days highlights. The first was finding a leopard. There are a few around but they are very elusive. The rangers and trackers are amazing as they find the leopards by following their footprints as well as listening to the noise made by birds and other animals. The leopard in the photo is a female –the males are significantly larger. 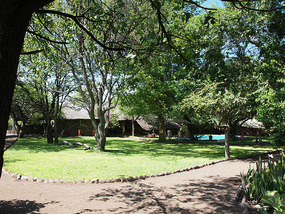 Main Camp
description
. The hyenas apparently had a baby in the hole in the photo which was their den. These are dug by aardvarks and then stolen by the hyenas. The buck warthog decided he was interested in the baby and threatened the den. Interestingly, the hyenas backed off and let him sniff around and even to go to the entrance – in the video they are just behind the tree. The hyenas showed great patience and eventually the warthog retreated. The ranger did say however, that if he warthog had really tried to get the baby, the hyenas would have attacked.

We again saw lots of giraffes and for the second day, came across our favourite elephant, recognisable by having one very short tusk. We also saw the cheetah and her cubs again, this time in a much more open area. They are not scared of the trucks because they have grown up with them and know they are in no danger from us. There are enough other predators around for them to be concerned about. In some photos, the body and markings of cheetahs and leopards look quite similar but cheetahs are recognisable by the black line on their face.
Other Entries
-

i can feel Sue mentally preparing some new paintings...

Thanks Renze and Sue, brings back wonderful memories.