The second herd was huge which our ranger, Kenosi, estimated to be about 80 elephants as they meandered past us without a care in the World 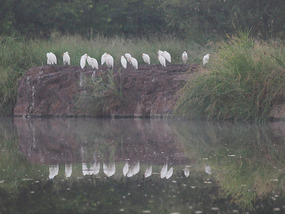 Morning Birds
description
. One of the babies was thought to be about a week old as indicated by the still pink ears and feet.

After the safari, we transferred to the Tent Camp. This has 8 “tents” as well as a pool, meeting room and dining area. The tents are comfortable and fully serviced including, in ours, a unique shower system. The routine is exactly the same as Main camp – safari morning and night and lots of food. The evening meal is outside around a log fire.

A different experience to Main Camp but very enjoyable.
Other Entries
-

You guys are amazing!