-
Harare was an experience. Our hotel which was government owned and run was rated as 5 star. During our stay there was a 5 hr power outage and the water did not run at various times. There seemed to be an extremely large number of staff who just stood around and talked to each other. The conference program was very fluid depending on who turned up or was available to speak. What was encouraging was that there were a number of keen young people attending and the people of Zimbabwe we met were great despite the problems the country has.


After the conference in Harare, we travelled to Victoria Falls to stay at the Wild Horizons Elephant Camp 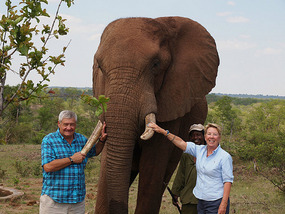 Close a`nd Friendy
. It is a 50 min plane trip followed by a 15 min drive from the airport. Sue sat next to a delightful 5 year old girl traveling to the falls with her family – very cute and very bright - see photos. The camp is a concession in the Victoria Falls National Park and about 8 km from the falls themselves.

Although the accommodation are tents it is truly 5 star – a better description would be luxury canvas villas each with a sitting area, posted bed, bathroom and a small plunge pool. There is also a common area surrounded by decks and a larger swimming pool all looking over the National Park.

We will be going to the falls during our stay but the spray can be seen from our villa. The amount of water going over the falls is so great that there are great plumes of spray thrown up. Although not the highest in the World, they are by far the largest in terms of water and width. 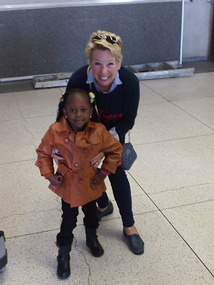 Sue' New Friend
. They are relatively friendly and you can stand with them and pat them when they come up to a water hole near the common area. The one in the photo is Jumbo who is about 20 years old.

However, the mascot and main attraction of the Camp is a pet cheetah named Sylvester who was rescued as an orphan and reared by the staff here. He is 5 years old now and comes to the common area in the morning and at night during his walks. During the day he lives in a very large enclosure where he is free to roam and run around. Visitors are allowed to sit and pat him but you will notice, Sue is always at the side or back of him so he is not threatened. After his walk he comes up and looks around before just sitting or lying down for a while to cool down before going back to his area. Sometimes, Sylvester can be a bit grouchy so the rangers just leave him alone to do as he pleases which is really nice to know – deep down he is still a wild animal and he is the boss, so not dominated by humans.

So although it is very restful here there is still enough to keep you occupied. We are looking forward to visiting Victoria Falls and the historic Victoria Falls Hotel in the next couple of days.
Other Entries
-