Safaris at Imbabala and then to Lusaka.

-
The morning safari which was in a Nissan 4 wheel drive safari vehicle started at 6:15am. We went along the river at first and saw a few animals and lots of birds. One of our stops was at a border crossing where the ferries shuffle trucks and cars between Zimbabwe and Zambia.
In fact, fours countries meet here, Zimbabwe, Zambia, Botswana and Namibia – quite a unique corner 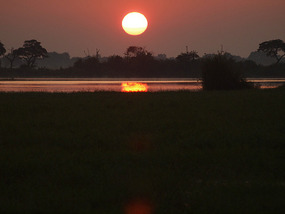 
We then went inland to see what was around – lots of giraffes, some zebra and impala but buffalo were still being elusive. The amount of birds was amazing – eagles, vultures, and other species we had never seen before. The ranger and two bird experts with us named them as they appeared.

After returning to camp at 10:30 am we had brunch, a rest and then took off on the river at 4pm. This time we saw a number of crocodiles basking in the sunlight on the banks of the river Again lots of birds and a most remarkable sight was a floating nest of the African Jacana – fours eggs in the nest supported by the water lily leaves. We had our cocktails watching two elephants drinking from the river and some hippopotamus wallowing nearby.

That night we had dinner around a camp fire in the bush near the river – very African. We then went on a night safari and saw some interesting animals including jackals, badgers and mongoose as well as sleeping giraffes and more elephants an impala 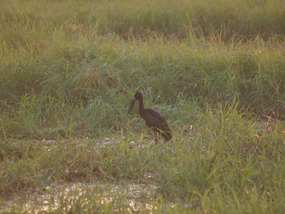 Spoonbill
. Night photography is not one of our fortes so no suitable photos. When we arrive back at the camp Harry the Hippo had returned to eat more grass and actually refused to go away this time. The rangers had to shoo him away before we could get to our rooms.

Our next morning safari started promisingly as we found leopard tracks quite near the camp. However, as much as our guide, Abraham, tried, we could not it anywhere. In fact, for a while that morning it looked as though all the animals had disappeared.


Eventually, after searching near waterholes, we found some impala and then came across a large herd of buffalo. This was great as these were really the only common large animals we had not seen in Africa. We had seen them in the distance during the night safari but from quite a distance. On the way back to camp we saw more elephants and giraffes an a magnificent black breasted snake eagle 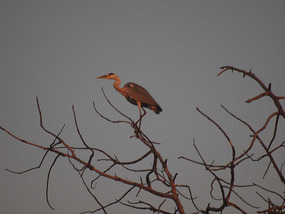 For our last African safari, the Abraham gave us the choice of either land or river safari – we chose the river. Again crocodiles and elephants and lots of hippos – significantly more than previously. They were very playful pushing and shoving each other around and then seemed to kiss and makeup. We also went to the waterhole, called the elephant spa by the guides, where we had previously seen lots of elephants but they stayed in the distance grazing.

Harry the hippo did not appear during the evening meal but we were told next morning he turned up during the night with a friend. It was interesting listening to the sound during the night when you woke up – apparently these were the hippos munching as well as the impala rucking – it's that time of the year when the male impalas start competing for females. 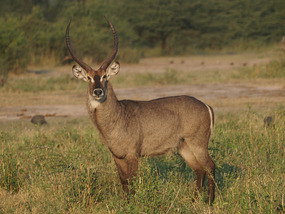 Waterbuck
. The crossing was at the Victoria Falls bridge show earlier. You formally clear Zimbabwe immigration on one side of the bridge and then are admitted by Zambian Immigration on the other. The flight to Lusaka was about 1 hr.

Lusaka was a pleasant surprise. It is relatively well organised and many of the major roads are tree-lined. We found a great market for material, shoes, dresses, etc (it’s called Kamwala Market) and of course bought some of those beautiful colourful African materials which will look great in Noosa. The Cultural Village was also another source of great African stuff.

So after two nights in Lusaka, we flew to Johannesburg and then back to Sydney. It has been an experience and on reflection the highlight was Mashatu in Botswana as this is where we were lucky enough to see the greatest variety of animals, especially lions, leopards and cheetahs. Seeing the Victoria Falls is a must and Imababala was also a great place to stay. There are lots of safari camps available, but if you are planning a trip to Africa, from talking to people we would recommend Mashatu, Victoria Falls and the Okavango Delta (in Botswana). We did not get to the delta but everyone says it is a must.

Three days in Sydney and then of to Maui – and we will see Chandler again at long last.
Other Entries
-

Another wonderful armchair trip with you...loved my first safari! The photos were outstanding! Can't wait till Tuesday...I'll pick you guys up at the airport. Safe travels back to Maui.

Thanks for sharing your adventure, have enjoyed the stories and pics. Could be my next holiday destination. Safe travels home x

Our thanks too, especially for the effort you make.