Visit to Kakum and the Crocodile farm

-
I slept pretty well last night, but it didn’t quite seem long enough! It was with heavy eyelids that I dragged myself out of bed and into the shower…
The six of us met at the restaurant for breakfast – good fresh fruit, and there are eggs, omelets, bread, and various Ghanaian things like cooked vegetables. 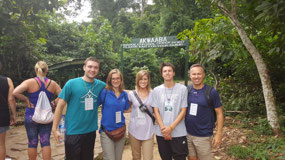 At Kakum National Park
We enjoyed the meal, and were ready to go when the van arrived at 9 am.
Kakum is nearly an hour’s drive from the hotel, north up and away from the coast. It was the first taste our group this time has of what the typical road in Ghana is like! Once we left the pavement, the road became a very rough, rutted and potholed dirt/gravel road. Our van bumped, creaked and groaned along in a manner quite familiar to me, but something new for the rest of the group. One of them mentioned a while later the realization again of how blessed we are in the US to have such comparatively good quality roads. And that is so very true!
As happens with some frequency, a bit over half-way to Kakum, our van developed a problem. We heard a loud noise from underneath, and then a steady thumping or drumming. The driver pulled over, and stopped to look under. Although we were in the edge of a small village, a policeman came by to chew the driver out for not being safe on the road! He explained that we were having a problem, and the office just wanted us to have a problem someplace else. 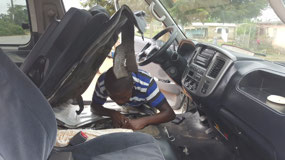 The broken down van ...
I suggested we pull to the other side of the road where there was a wide gravel spot off the road. He did so.
The van is a mid-engine model, so the engine sits directly under the driver and front seat passenger. With neither of us seeing anything underneath, he flipped up the seats and opened the engine compartment. There we found the problem. This engine runs with one long serpentine belt. It had somehow slipped part way off the main pulley on top, allowing the outside ¼ inch or so of the belt to be hanging off the pulley. Over a little time it began to break and finally a long section was peeled off and loose – immediately wrapping itself around the radiator fan. It was this loose piece flapping against the underside of the engine cover that we were hearing.
The driver worked some time to get this broken piece of belt off and out of a very hot engine compartment. Once that was done, with no way to replace the belt or do much to alter the way the remainder sat on the pulley, he closed up the compartment, started it up and we headed back on the way. 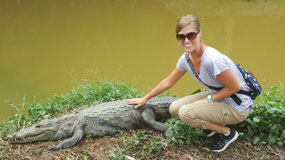 Alyssa pets a crocodile
The basic philosophy is that it will work until it stops working. Guess its hard to argue with that…
Kakum is a unique place, especially for visitors. They claim it was the first suspended bridge tourist walkway of its kind in the world. The bridges were built in the mid-1990’s by two Canadian mountain climbers with the help of a number of Ghanaian workers. Very large braded cables are hung between trees, and then heavy thick ropes are tied below. An aluminum ladder type of structure is placed on the ropes on the bottom with wood over them for visitors to walk on. There are ropes on the side and netting too. There were initially 7 bridges going from tree to tree, but now they have added an 8th – a “chicken out” section. If you go one section out and feel you can’t go on, you can take the “chicken out” section which will take you to near the very end and you can quickly get off the bridges. As expected, none of our group took the easy side way out!
At the highest point the bridge is 40 meters off the ground (approximately 130 feet). 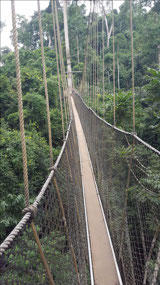 The Canopy Walk
It was a bit hazy, but not too bad, so the view from the canopy of the rainforest was very good! It is also interesting to note that even at that height, the large tree at the farthest out point is so large that it would have taken at least three of us together to touch hands around it!
At the end of the bridges we are offered the opportunity to take a nature hike for a “modest charge”. For the 6 of us it amounted to nearly $40. But this is unique, and some of them may never have the opportunity again, so we all opted for the extra hike.
As we walked up and down through the forest our guide pointed out various trees, and what they could be used for. If you strip the bark off of one, boil it and drink the water, it will cure stomach problems. Another we were told would cure asthma. Still another help with broken bones, and so forth. I’ve often wondered how some of these things were first discovered. Who originally thought “I have stomach problems, so let me scrape off the inside of the bark of THAT tree and try it!” Trial and error? “Ooo, don’t use that one, it killed the last guy to use it, so let’s try THIS tree instead…” Who knows, but our guide was very adamant that these traditional cures really work, giving personal testimony of their effectiveness.
The temperatures weren’t too bad, but the humidity was so high that I think we were all sweating quite a bit by the end. But it is a fascinating and always enjoyable experience – one you can’t get in the same way anyplace else!
After returning to the van (with the same belt still in place), we started up and headed back toward Elmina. On the way is a place called Hans Cottage. It has a restaurant and sleeping rooms you can rent and stay there if you like. But the real draw and claim to fame are the crocodiles that live there.
Hans Cottage was started a little over 30 years ago, and one of the largest crocs on the place, named “Saddam” has been there from the beginning. They have brought in a few more, and they’ve begun reproducing so that they have in excess of 20 in the ponds. The man who took us out to see them explained that they keep lots of tilapia and catfish in the ponds, so the crocks can eat whenever and as much they like. That combined with the fact that they are used to people being around all the time helps keep them more docile.
For 1 cedi you can pet a crock if you wish, and three of our group wanted to do so. The one we were able to approach is about 2 years old, and some of the other people (not with our group) wondered aloud if it was really alive. So the guide stuck his staff in its mouth and it bit down and began to turn away. Proof enough it was very much alive! So Gabriella, Alyssa and Daniel were able to touch a live crocodile – down on the tail end, not up by the head! Another man there was asked if he wanted to pet it, and his comment was that he wears them, not pets them! Fair enough!
We arrived back by mid-afternoon. Three of the group wanted to visit a little shop not far from the entrance of the hotel, and the rest of us rested or worked a little. It is overcast, so dinner at sunset and the beginning of the Sabbath isn’t as spectacular as ocean sunsets can be, but it is still a pleasant time.
We enjoyed a pleasant meal and conversation for almost two full hours! I was initially disappointed that the touring part of the trip must happen before camp this year. Typically it is something we do after the work of camp to relax and enjoy some of the country. But this time the schedule did not allow for that. However, I think it has worked out well as it has given our group a chance to bond and come together as a team.
After dinner we all went back to our rooms with plans to meet back for breakfast at 8 am. However, before Daniel and I got back to our room we discovered we had a problem. There was water on the floor of the hallway, and when we opened the door to our room we found water in the entranceway and all over the bathroom. It actually appears that it seeped under the wall of the bathroom and into the hall. We talked to the front desk, and they sent up a maintenance man. In looking around he quickly decided they have a major plumbing problem, and we would need to be moved to another room. So we set about packing our things back up, and when they came back we were moved down the hallway to another room that is just fine. We are still only a few doors from where the girls are staying and the Demarest’s are staying, so that’s good.
Cody and Bobbi Kitts have arrived in Accra, and my usual driver picked them up and is bringing them directly to the hotel. Expected time of arrival is 11:30 to midnight. They’ll get some sleep before we head to Sabbath services in Elmina tomorrow. But since we have nothing planned for the afternoon, I imagine they’ll use that time to catch up a bit on some much-needed rest!
Other Entries
-

Hey, I recognize that bridge! Thank you for the updates. Keep them coming during camp. I can certainly understand the van ride. A few years ago I asked my driver why he kept a serpentine belt next to him in the car. He said "just in case" and it wan't too long after that Q&A that we started to hear a loud and fast thump thump thump. You can guess what happened. No need to replace if it is still working. TIA! May God bless the camp and all of you there. tw

Quite an amazing bridge and not for those squeamish with heights. How interesting to get a tour of trees known for traditional cures. Also the crocs--nice that they are kept well fed. Will be praying about the camp and you all.