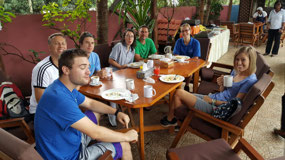 A tropical breakfast this morhing
This morning we were able to take a more leisurely approach. A car came to pick us up shortly after 8 am to take us over to the sister hotel where we were able to have breakfast at no charge. As I mentioned before, the restaurant in our hotel is currently out of service, and the new place was quite pleasant with a good breakfast.
Since we cannot get on the camp until after noon, we went back to our hotel and had time to pack, read, even take a short nap. It is always nice if one can start camp fairly well rested!
With the little Toyota our driver left with me, I was able to shuttle everyone over in just two loads. It did require that some bags were stacked on laps, but it is only a little over a mile there, so it wasn’t that big of a deal.
Our rooms at the Christian Village Conference Center are nicer than I had thought. We have no a/c, but the temperatures are pretty mild for here, dipping down into the 70’s at night. And the humidity isn’t quite as severe as it is further down on the coast. 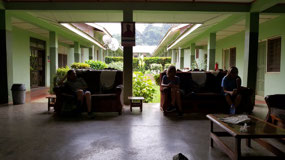 Our accommodations on camp - very nice!
With a good ceiling fan I believe we’ll be ok. There also is no hot water for showers. As often as I convince myself that it really is no big deal, and taking cold showers is not a problem, every time I step into that icy stream of water I’m reminded that it really is that cold… J
Since this is a new facility to us, we took some time this afternoon to walk around and find good locations for each of our activities. The soccer field is typical for here – a large drainage rut going through the middle – but it is what most of the kids are used to playing on, and we’ll adjust. We also will probably turn the field sideways so we can use the other end for kickball. Both activities will work there just fine.
Up near the main buildings there is a grassy field where we will have Ultimate Frisbee and Challenge games. Both have good locations. And we found a lot that will work for volleyball. We have the net, but out biggest challenge is to find a good way to have uprights for the net to be fastened to. 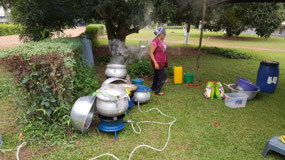 Camp kitchen - feeding 120 three meals a day!
comment
We hope to have that by morning.
Our new activity this year is slingshots. We purchased enough so every child in a dorm will be able to use them. We found a good spot with nothing but trees behind. We’ll use empty bottles and cans as targets, and the ground is full of the tiny stones that will be used as ammunition. I hope they’ll enjoy learning something new!
Contrary to the agreement we made with the management 6 months or so ago, they have rented part of the grounds and buildings to another group who will be here the same time we are. So we are having to make accommodations with what buildings and facilities we can use. Sadly, it is not uncommon for agreements to be changed at the whim of the management if they feel they can make more money. This is turning out to be somewhat of a disappointment.
Because of the other group, we are unable to use the main kitchen area to cook all the meals for our campers. But our ladies, especially Esther Dima, wife of the local pastor here, are real troopers! They have taken the propane stove we own, and rented two more and set up a kitchen under a tree out in the yard! Take a close look at the picture and ask whether you would like to feed around 120 people three meals a day from a kitchen like this!
Most of the campers arrived before dinner time, but one bus, coming down from the areas of Yeji and Makango broke down on the way, and those campers didn’t arrive until well after dinner, when we were beginning the camper orientation. But all are here now.
As I typically do, I welcomed the campers, and went over some of the rules of the camp, and the things I expect of them. I also mentioned that if someone decides they do not wish to abide by the rules of camp, we’ll simply put them on a tro-tro and send them home. That got a laugh, but they know it is serious. I expect all will behave very well, as most have in years past.
I have discovered that while we have no wi-fi on camp, I am able to turn my phone into a hotspot, so perhaps I’ll be able to continue posting my blogs. If not, then you won’t get these for a few days…
Other Entries
-

Hats off to Mrs. Dima!! Praying you'll all have a most wonderful camp experience!

Tks for the camp update. Keeps us all in touch with the Brethren around the world. Especially illustrates how resilient and innovative God's people are.

Hats off to campers and staff in Ghana for their adaptive, non-complaining spirit in dealing with difficulties when they arise. God certainly sees and will bless your attitudes. Life is not always easy.

What an interesting idea to include slingshots. Very encouraging to read of everyone's flexibility.