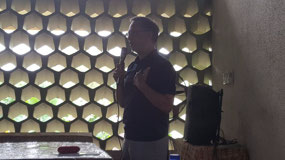 Cliff Demarest giving the day's Christian Living
The alarm seemed to go off much too early this morning. I can tell the rest of the volunteers are also tired from all the activities and perhaps the sun and heat. It seems like we all came to breakfast dragging just a bit more than previous mornings! But that’s what camp is all about – come and give 110% for the campers, and have a lot of fun yourself in the process!
After breakfast Cliff Demarest gave the Christian Living class. He brought up the Amazing Race TV show, and how on one episode they came to Ghana to do their activities. He likened that to each of us being on an amazing race of life, spiritual life, with a wonderful reward at the end if we are faithful. He then gave four steps to help the campers finish their race strong.
The activities all seem to be going well now. As campers and staff we are all settling into the routine, and thankfully there were no more changes or surprises from the host manager, so we went along just fine.
I had my second Lifeskills class today, this one with the boys. 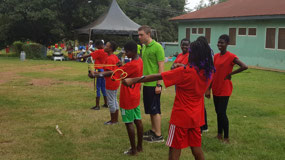 Enjoying the new activity of slingshots!
I used the example of Joseph, and drew several lessons from his life that they can each apply right now, if they want to become godly young men. While the girls were quite shy and reserved, the boys were much more willing to talk and engage in the class, and I appreciated the additional participation.
We have been hit with some illness among the campers. At least one camper has come down with a case of malaria, and three more are suspected of having it. Given the period of time from infection to symptoms showing up, they had to have become infected before they left home. But the symptoms have hit them here, one of the local pastors went out to get the medication they need. I’ve been told that once they start taking the medication, the symptoms will disappear within three days. That means they should be feeling much better by Sabbath, or at least by Sunday when they will all board the busses to return home.
As promised, two men from the Ghana Narcotics Commission came to camp this evening, complete with a projector and powerpoint slides. 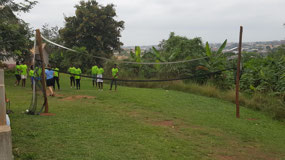 Our new volleyball court with uprights
While much of the material they gave was rather elementary, it is clear this is new material to the campers. Unlike the US or other Western countries, drug education has not been a part of the school curriculum. But the abuse of drugs and alcohol is on the rise in Ghana. And for many years Ghana has been a transit hub for drugs from Asia, South America or elsewhere in Africa making its way to Europe or the US. They did show a fairly graphic slide of what has happened in a couple of cases when someone tried ingesting drugs to make it through security at the airport, and one of the bags burst inside them. There were also a few slides of famous people who had addiction problems, and showed the before and after pictures. Hopefully this kind of material will help discourage any pressure to use, or curiosity to abuse drugs. Interestingly enough, the man closed by quoting I Corinthians 6 19. I found that interesting, as you would never hear an official government presentation include a scripture in the US!
Following that presentation we had time to play a few evening games. After some technical difficulties with the sound system, we were able to get some music playing for them to do the limbo (obviously something new to them), and then also a couple of rounds of musical chairs. The music selected was typical Ghanaian style music: one or two measures with a heavy beat, repeated over and over for 10 or more minutes. I’m going to have to pull out my MP3 player and listen to some Kenny Chesney or Alabama for a few minutes to drown out those two measures…
Hopefully we’ll all sleep well tonight, and tomorrow is the last full day of activities.
Other Entries
-

Greatest joy it brings when campers meet as a unified body .i wish them all the best ,minister tom and volunteers enjoy your stay .

Will be praying about campers with malaria. It must be nice to hear a drug presentation end with reminder of the body as the temple. Nice picture of the slingshot activity.