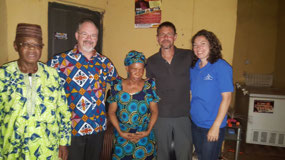 Mr. Aghimien and Beatrice Iyamu with us
Osas was at our hotel with his car by 9:40 this morning to take us around the city for some visits. He has an older Volkswagen station wagon, that has most definitely seen better days, but it runs, and by careful coaxing he is able to guide it down the streets in the direction he wants it to go. He hasn’t had it above perhaps 35 or 40 mph with me in the car, and that would appear to be about the safety limit of this old vehicle! But he very willingly brings it around to serve, and we have to virtually twist his arm to get him to pull into a petrol station so we can fill his gas tank!
Meeting the members has been a unique pleasure. Yesterday Roderick Smart told me how he first came in contact with the Church through some literature he received in the early 1970’s, but he did nothing with it until sometime in the early 2000’s. At that time he wrote to both the British and South African offices from the addresses that were in the old literature.
Somehow, that letter found its way to our own Cecil Maranville, who wrote a response. 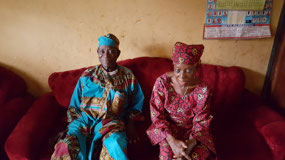 Mr. and Mrs. Igdaliah
But in another strange twist, Mr. Smart told us he had just opened a post office box, but had not as yet given that address to anyone. A week or so after opening the box, the letter from Mr. Maranville arrived. He was amazed, and didn’t know how that letter found its way to his new PO Box! Clearly God had a hand in it, and he was eventually baptized somewhere around 7 or 8 years ago, and is still a faithful member to this day!
This morning one of our visits was with Mrs. Beatrice Iyamu, who is almost entirely blind and VERY hard of hearing. But her mind is sharp, and once she understands your question she will go back in her mind many years, giving you dates and details with great certainty!
In 1962 she moved to London, England, where she lived until 1967. It was there that she first heard “The World Tomorrow” radio program over Radio Luxemburg. I’ve heard and read numerous times about the use of Radio Luxemburg by Mr. Armstrong many years ago in the early days of the Radio Church of God, later called the Worldwide Church of God. 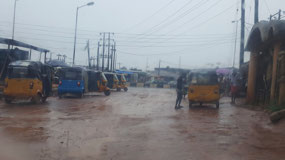 3-Wheeled Kakekeneppe taxis ready and waiting
But to my knowledge she is the first person I’ve met who heard and was drawn by the program over that station so many years ago!
She was not baptized until after she returned to Nigeria. She was baptized in 1977, and very proudly and emphatically told us she kept her first Passover in the spring of 1978, so she has kept 39 Passovers, and has not missed a single one! And she is proudly looking forward to this coming spring when she will keep her 40th Passover! Her zeal, enthusiasm and sharp memory are both encouraging and inspiring!
We also began baptism counseling with a young woman who has been attending Sabbath services for a couple of years, and is married to one of the young men in the congregation. While I’ve counseled and baptized many people over the years, this is a new experience for me in Africa. In Ghana we have resident pastors who take care of the people. Due to the language barrier, I typically do not conduct the counseling or the baptisms themselves. But in Nigeria we do not currently have a resident pastor or elder, so they are stuck with me! We talked for over an hour, and I left her with some foundational elements of faith and belief to consider, study and pray about, then contact me when she is ready to discuss them further. 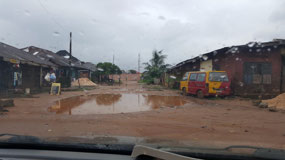 No way around, we have to go through!
When she does, I’ll make arrangements for us to visit again when I return to Nigeria.
After the visits Osas dropped us off back at our hotel for a couple of hours. It had been raining when we stopped for the last two visits, so I was a bit damp. We are in part of the rainy season here, so many of the potholes are filled with water. When one gets off the main roads in the city, they go from paved – or at least an attempt at paving, to dirt/sand/mud this time of year. Osas’ small Volkswagen is front wheel drive, which is helpful, but some of the mud and water looked pretty deep!
At one point on the way back rather than to straight through a rather large puddle (looked bigger than the car) he turned to the right. Unfortunately there were just as big of puddle this way too. So before we entered the water, he stopped, opened the hood and unplugged the electric radiator fans. He knew we could splash water up into the engine compartment, and he didn’t want to short out the motors for those fans. As we went through I kept watching the bottom of my door to see if water was starting to come in, but none ever did! I do think it is a good thing there are no holes in the floorboards of his car or we likely would have taken on water! Once past that, he pulled over to plug the fans back in and we were on our way. Just another day in Benin City!
I was able to get a little work done, and also received a call from a pastor in the US so we could discuss a couple of needed items before it was time to go. Osas came shortly after his intended time to take us to the hall they rent for Sabbath services. The Bible study was scheduled to begin at 4:30 pm, but I don’t believe we arrived until shortly after that. I had some conversation downstairs and on the way up, and I didn’t make my way up to the room until nearly 5:00. But we were able to start shortly after that.
After some introductory comments, and an update on our efforts to secure a place for the Feast this year, I gave a Bible study on zeal for our calling. God is certainly zealous for His plan (Zechariah 8:1-5), and He wants us to be zealous for the calling He has so generously given us. We looked at some of the things in life that are real zeal-killers, and then looked at what we can do to combat them from what Paul wrote in Romans 12:10-13. We took each of those elements (rejoicing in hope, patient in trial, urgent in prayer) and looked at what we can each take home and do today to rekindle the fire and zeal we should have for our calling and the Plan of God. I hope it connected.
After more fellowship, and a shorter visit in a side room of the hall, Osas took us back to our hotel where Cody, Bobbi and I met in the restaurant for dinner a few minutes later. We do have one more shorter visit scheduled in the morning, and then we have to go to the airport here in Benin City for a short hop back to Lagos. We hope to have a visit with a member family in Lagos, perhaps over lunch, before we proceed on to our gates and fly out to begin our trip back to the US tomorrow evening.
Other Entries
-

Hello Mr. Clark. I have been enjoying each update from your trip. Thank you for sharing your journey with us.

I have been loving your travel blog and trip through Africa. Praying for continued safety. Love to see the brethren over there and their zeal for the truth.

I have enjoyed and appreciated reading your blog. Thank you for writing it. I think you may be interested to know that Roger also heard the World Tomorrow broadcast for the first time on Radio Luxemburg. This was in 1960 when he was serving in the US Air Force on a remote RAF base in England. Roger applied for Ambassador College and got an early out of the Air Force to come to college in 1961. Mrs. Lyamu and Roger share hearing Mr. Armstrong for the first time over Radio Luxemburg.

Great to follow your travels. Much to appreciate in the God blessed countries of Israelite descendants. Your postings provide good insight; enabling more effective prayer for our brethren's challenges.Safe travels. TKS!