Final morning, and the trip home 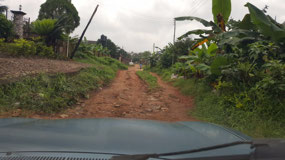 The "street" in front of the Smart's home
After a decent night’s sleep, I showered and got my bags mostly packed up before meeting Cody and Bobbi downstairs for breakfast at 7:00 am. Mr. Rodrick Smart was to meet us at 7:30, but he showed up early – before we had finished eating. So we all talked a few minutes while the three of us finished getting our breakfast down. Then we made our way out to his antique Peugeot sedan for the trip to his house, and visit with his wife, Florence.
About three years ago Florence suffered her first stroke, and she’s had several since. They’ve left her unable to speak, walk, feed or dress herself. She requires now constant round-the-clock care. The daughter of Mrs. Iyamu works for them several hours each day to help with Florence, and two of their children have moved back home in order to help take care of their mum. A son who was there when we arrived told me of his love of cooking, and how he had a restaurant before his mom’s stroke. He sold it and moved home to help with her because “she gave so much for us, we need to give back. 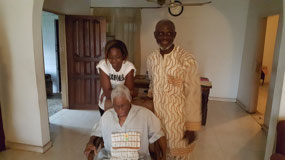 Rodrick and Florence Smart, and their daughter
” A very honorable attitude! When the time is right he plans to once again get back into the restaurant business.
Mrs. Smart has never met me, but she smiled and seemed happy to greet me. But when Cody and Bobbi came over, whom she’s known for a number of years, she was laughing and even had tears of joy to see them. That is quite a testament to the love and concern they have shown for God’s people in Nigeria, and how our brethren here respond to that!
The power was out (an occurrence more common than the power being on), so after we arrived Mr. Smart fired up a small generator. Everyone who want to have power when it is needed must own a “gen”, and likely two. I noticed that he has two, the small one he started (probably just for a few lights and such), and a larger one that probably has the capacity to run most everything in the house.
The Smarts, their son and a daughter as well as the three of us shared some enjoyable conversation for nearly an hour. But the traffic in the city would be picking up by now, and our schedule was tight (or so we thought), so we loaded back into the old Peugeot to go back to our hotel, finish packing, settle the bill and head to the Benin City “international” airport. 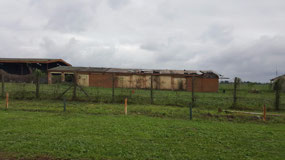 First thing we see at the Benin City airport...
(It is called an international airport, but I’m not sure any flights actually come in or out from another country. I suppose it could be that international visitors occasionally pass through, so the more prestigious name is used!).
While the Smarts have a nice house – spacious by Nigerian standards – their road, the city “street” is as bad as any I’ve seen. I tried to take some pictures out the windshield, but there is no way to capture the full impact of such a road on a flat two-dimensional photograph!
Back at the hotel I changed into the shirt I want to travel in, packed the last few items in my suitcase, checked to make sure I’d not left any chargers or other things, and headed down to the front desk. Mr. Smart stayed with us even though Osas was coming back with his trusty old Volkswagen to take us to the airport, about a 10 minute drive depending on traffic.
Osas arrived shortly, and with the bill paid it was time to begin the long trip home. We loaded our bags and climbed into the Volkswagen with Mr. 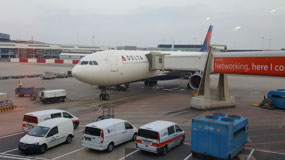 Thanks for the blog, I really enjoyed keeping up with you and your group. We pray for you and group.

We thoroughly enjoy reading about your travels to visit our far off brethren! Knowing Cody & Bobbi plus a few of the FOI volunteers made it easy to visualize what you were writing. You should be home by the time I'm reading this. :-)