Friday and the Sabbath 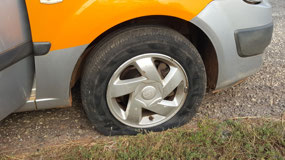 Blown tire on the taxi
Yesterday, Friday morning, Mr. Horchak and I had meetings with a couple of the men that took all morning. We were able to address some questions and issues that come up in some of the local areas. Sometimes just talking through a situation and getting another point of view or two can be very helpful! We were also able to finalize a personnel matter.
The afternoon was spent in our rooms catching up on emails and finishing our preparations for the Sabbath. I reworked my sermon for tomorrow, and fortunately was able to go up to the front desk and have them print the notes off.
For dinner Mr. Horchak suggested we walk up to the Shell gas station (called a petrol station here) and pick up a bottle of wine with which to begin the Sabbath. I know that sounds strange to buy wine at a gas station, but here it isn’t as odd as it seems. A gas/petrol station may be a good place to buy items (like a convenience store in the US) or even eat a meal. A good restaurant in Elmina is in the Shell station there too!
They didn’t have a large selection of wines, and we didn’t recognize the labels on any of them. 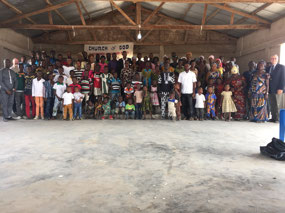 Yeji Congregation
But Mr. Horchak picked up a red wine from Spain that seemed a good choice. The price translates to about $5.50 US, so not a bad price and we decided to give it a shot.
Neither of us had a corkscrew with us, but in the hotel restaurant they located one and he was able to open the wine. We each ordered a meal, and they brought us a wine glass each. The wine was really pretty good, and a nice way to enter into the Sabbath.
This morning our taxi was to arrive at 5:30 am for the long trip to Yeji. Reuel Dima, our pastor in Kumasi, had arranged the taxi, and this time was to give us a little wiggle room in case something goes wrong (which often does). But Reuel and the taxi didn’t arrive until just before 6, so we loaded up and were on our way just about 6:00 am.
We started out in a lightly drizzling, foggy condition, but it shortly burned off and we were travelling well. Reuel was in the front seat so he could direct the driver, so Mr. Horchak and I were in the back. I commented to Mr. Horchak that this driver was worrying me a little, going a bit too fast on the straight aways, and weaving in and out of traffic, passing where it wasn’t really safe and so forth.
Not two minutes later we were all jarred by a very HARD impact of some sort! Instantly the inside of the car was filled with dust, but we were still moving. It started out cool, so we had the windows closed, however now we had to open them to evacuate all the dust. And the driver pulled over to see what happened.
All along the way there are speed bumps. Some are small bumps maybe 10” wide and high enough to make a vehicle slow down. Others are about the same height, but they are 5’ or more wide, and sharply angled on both sides. Our driver had missed seeing one of the big ones, and he hit it at what we would estimate to be 50 mph! The terrible jarring we felt was from the impact with the front of it, and the impact on the other side as the car – which may have gone slightly airborne, hit the ground again!
The impact blew out one of the front tires, but we were a little ways from the next little village, so our driver decided to drive it on into town to get the tire fixed. That was not to be. He went right on back up to speed, but only for a very short distance when we could hear the tire flopping and beginning to come apart. So he pulled over and got out his spare, which was a donut spare tire (and not a fully inflated one).
He got his lug wrench only to discover he had no jack! So he flagged down a passing motorcycle and asked him for a ride into town to get a jack. They took off and another taxi pulled over to see if they could assist. Our driver didn’t get very far, and came running back down the side of the road just as the other taxi got the car jacked up. The tire was switched, everyone shook hands and we got back on the road with an almost half flat donut spare.
I mentioned the spare was for short distance and not at full speed – but that didn’t seem to get translated very well. So I hung on waiting for the inevitable blowout of the donut – and prayed for protection. God was good, and we arrived at the town of Atebubu where there was a roadside tire shop (a pile of used tires, a compressor and two guys with pry bars and hammers). They pried off the shredded tire and put another on. But when they aired it up they discovered a big hole. So they pried that one off and beat another into place. It didn’t seem to leak, and putting it in water didn’t produce any bubbles, so it was put on the car and we were ready to go.
Spin balancing? Oh, that’s overrated anyway…
We finally made it to the Church building in Yeji about 10:40 (services were to start at 10). I had the first split sermon and I apologized for the delay and briefly explained why. Everyone understands, because they all know how things work in Ghana! Mr. Horchak had the second split sermon, and by this time it was getting quite warm – I was  sweating through the back of my shirt!
We had an hour and a half Q & A session with some of the congregational leadership, and then it was time for us to get back on the road to get down to Kumasi. There is no way we’d get back before dark, and it can become dangerous on the more desolate roads after dark because of some roving armed robbers. But at this time we’d at least get close to Kumasi and a lot more traffic, people and consequently safety.
We were dropped off at our hotel shortly after 8 pm tired, sweaty and with a thin layer of dust and diesel exhaust – but glad to be back!
After dinner in the hotel restaurant I went to my room, called to talk with my wife a few minutes, and laid down on the bed where I fell instantly asleep. Tomorrow will be the trip back to Accra.
Other Entries
-

Thank you for taking the time to write us an update of your day's trip! A vivid picture of tire changing made me laugh! The day's tasks were accomplished in service to God and His people!

Yikes!!!!! That sounds so stressful - and you have so many stories like this about mishaps on the road.