Trip back to Accra 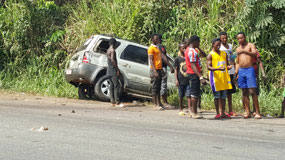 The wrecked little Mazada
After a very good night’s sleep I was able to take care of some work in my room, meet Mr. Horchak for breakfast, pack and get ready to leave. Our driver was a half hour early, so I was able to settle the bill, we loaded up and were on the road before 11 am.
The road to Accra from Kumasi is fairly good – at least by Ghanaian standards! So the trip went smoothly.
At one point I noticed a small Mazda SUV driving recklessly and very fast. He passed us at a point where it was absolutely unsafe to pass, and our driver braked to allow him back in and on his way.
About 5 minutes or so on down the road we came across an accident that had just occurred. It was the same little Mazada. It looked like he had lost control as he came over a hill that was also on a curve. It appeared he had rolled, but landed on his tires in the ditch on the opposite side of the road. There was a crowd around, and as we pulled up they were pulling the man from the car. I don’t know how seriously he was injured, but they put him in another car and rushed away toward the hospital. Our driver had stopped to see if he could render assistance, but by now there was nothing more to be done. A firetruck was coming (although nothing was on fire), so it was best for us not to add to the crowd of gawkers.
It was a rather sobering reminder of the dangers of reckless driving. And I suppose even more so in a country without vehicle safety inspections, and one never knows the conditions of your vehicle or the others. Prayers for God’s protection every time we travel are always important!
We got to my hotel, unloaded our bags and walked up the road to the African Regent Hotel for dinner. This is a very nice hotel, and I am not willing to pay their prices for a room! However they have a good restaurant that while more expensive than average, is not terrible by American standards. We enjoyed a meal and more conversation before it was time to walk back to my hotel.
Mr. Horchak made sure his bag and carry-ons were packed properly, and took the free airport shuttle. His flight is to leave later this evening, and if all goes well he’ll land in Dallas tomorrow afternoon – apparently just ahead of a band of rain/sleet/snow that is predicted to move through!
My flight leaves about mid-day tomorrow for Lagos for the second leg of my journey.
Other Entries
-

Glad you're safe! We are praying for your continued protection as you move forward. Thanks, as always, for letting us tag along virtually.

Continued prayers for safe and uncomplicated travel, Mr. Clark, and that God richly blesses all involved!

We truly need to ask God for protection on our daily journeys! Thank you Mr. Clark and Mr. Horchak!