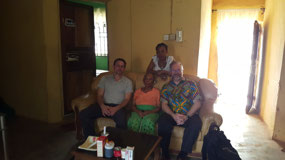 Cody, Mrs. Iyamu, Juliette and me
I suppose people may get tired of reading about how I slept any particular night, so I’ll just say I slept well and leave it alone for the most part from here on out.
Osas called about 8:30 to let us know he had been able to make contact with the two families we wanted to visit today, and he could come by about 10:30 to pick us up. Our first stop with at the home of Beatrice Iyamu. Mrs. Iyamu is 77 years old, and is blind. She proudly told us today that she is looking forward to the upcoming Passover, and it will be her 40th Passover! She began keeping the Sabbath and attending Sabbath services in 1976, was baptized later in 1977 meaning her first Passover to be kept was 1978. It is always heartwarming and very encouraging to hear stories like hers, and see the steadfast faithfulness she has maintained all these years!
She seemed so happy to see us again. She knows Cody and his wife Bobbi much better than she knows me, and she wanted to know all about how Bobbi is doing. She also asked about my wife and whether or not she will be with me in Nigeria for the Feast this year, because she really wants to meet her! I explained that the plan is for me to spend half the Feast in Ghana and half in Nigeria, and we are very hopeful that all will work out so she is able to come with me. 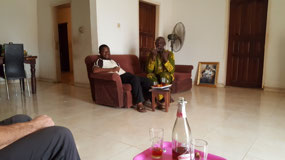 Mr. Smart and Osas
Mrs. Iyamu is cared for by her daughter, who is a nurse. I won’t attempt the traditional name, but the English name of her daughter is Juliette. Juliette grew up in the Church, but because of problems locally a number of years ago she stopped coming. She is now attending with her mother every Sabbath, and indicated that at some point she would like to talk about baptism. Juliette obviously cares deeply about her mother, and got up a couple of times to help her mother with something.
One thing was a hearing aid. Mrs. Iyamu is very hard of hearing, and initially she wasn’t able to hear very much of what we were saying to her at all. This hearing aid is a bit different from any I’ve seen before, but it did seem to help, and I think she got much more out of the conversation than before!
Before we left, Mrs. Iyamu asked if she could sing for us! She said she loves singing, and wanted to sing a hymn for us, which we readily accepted! I captured a short video of her singing, but am unable to upload it at this time. 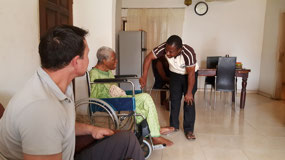 Cody, Mrs. Smart and Osas
After about an hour and a half we said goodby with promises to see them again on the Sabbath.
It takes nearly an hour to drive across Benin City from Mrs. Iyamu’s house to the house of Mr. Roderick Smart. Mr. Smart is a retired government worker who cares for his disabled wife, with the help of one of their daughters.
When we arrived the power was off (a common occurrence, in fact we lost power while we were talking with Mrs. Iyamu). But he has a small generator, so he started it up so we had lights and ceiling fans, which made a big difference in the 98 degree heat!
After the greetings all around Mr. Smart honored us by opening a bottle of champaign! It was enough for us all to have a small glass, and we left some for them to drink later on. It was a very special gesture that we appreciated very much.
After over an hour of conversation it was time for us to take our leave and head back to the hotel. The restaurant told us that while they have pizza on the menu, it takes about an hour to prepare it. So Cody called in an order ahead of time, and we both took care of some work in our rooms before heading down for dinner. Pizza and a beer – not a bad way to end a full but enjoyable day!
Other Entries
-

It is inspiring to hear of people who have remained faithful--and those returning to the faith!

I like to hear how you slept. We do pray about these things so it is good to hear when you do sleep well. Always enjoy every part of your trips.

Glad to hear about our brethrens in Benin! Another successful visits by you and Mr. Kitts! Champagne, pizza & beer are special treats for all your labor! Thank you for writing to us!