Visit and travel to Benin City

Traffic in Lagos
I have heard of Uber cars, but I’ve never taken one before. The couple Cody and I were able to visit this morning have the app on their phone, and called for an Uber driver to come to our hotel and take us directly to their place. As it turned out, he was very nice, had a clean car with good a/c, and he knew his way around Lagos – and that takes some doing! And the price was only a fraction of what I paid for the transportation service who picked us up at the airport. I think I’m going to have to look further into Uber, and see if it is possible to schedule a ride well in advance – like a couple of days in advance. If so, I might arrange to have a driver meet me at the airport when I arrive next time.
After a very enjoyable visit it was time to head to the airport. We had received notice that our flight was delayed, so we had a little extra time. However, we felt it was wise to leave a little extra time just in case – and that turned out to be a very good decision!
Shortly after the second Uber of the day showed up we were once again in very heavy traffic. 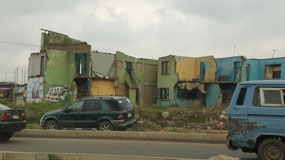 Crumbling apartment buildings around Lagos
Without traffic the trip would take 15 minutes or less, but today it was nearly two more hours. I tried to capture a few photos of what the roads look like, but pictures just don’t do it justice. Realize many of these cars aren’t in any particular lane (including ours)!
As our driver realized we were now close to missing our flight he got very aggressive with his driving. Any time there was a space on the right he would take it and accelerate rapidly before slamming on the brakes when he had to get back into the flow of traffic (which wasn’t much of a flow). In doing so he would get ahead of another 4 or 5 cars.
But he made it just in time! He pulled up outside the domestic airport terminal about 40 minutes before our flight was scheduled to take off! We paid him and rushed inside. We were able to get our boarding passes and get through security with even a few minutes to spare! Neither of us likes to cut it this close, but we didn’t have much choice this time!
I breezed through security, but they stopped Cody when they scanned his bag. He has a stick of deodorant in there, and they wouldn’t let him through with it. They said he cannot take it on the plane! With little choice, he threw it in the trash and went through.
Once inside the gate area he spotted one of those small airport shops and went to see if he could buy a stick of deodorant. He was able to buy one, but as it turned out they were selling exactly the same thing he had just thrown out! So security said you can’t take that on the plane, but they sell it in the gate area where you can then carry it onto the plane!
I can’t even begin to understand the logic. But I guess security felt good because they did their job and kept that dangerous deodorant off the plane. The shop owner felt good because he sold a stick of deodorant. And we are all going to feel better over the next few days because Cody once again has deodorant J!
We boarded on time, and in short order we were out on the taxiway headed to the airstrip to take off. That’s where we stayed for the next 40+ minutes. The pilot came on to tell us that some severe thunder storms (which we could see in the distance) were creating problems for two planes who were coming in to land. They couldn’t go through the storm, so they had to circle way out around and then land from the other direction. Since a landing plane has priority (and probably the least amount of fuel remaining), we can’t go anywhere until those planes get on the ground.
I might add at this point that so far as I can tell the domestic airport only has one landing strip, so when they have someone in need of getting on the ground, everything else stops until they get down. But I think we all understood, and would want the same consideration if we had been up on the air at that moment!
The flight on to Benin City was smooth and without incident and we landed safe and sound – and Osas was at the airport waiting for us. Since we were almost exactly two hours after we originally were scheduled to land, we had to make a change in schedule. We had planned to make one member visit this afternoon after arrival, but since we were so late, that was now not practical. Osas was able to call them and explained the situation which they understood. We’ll work to make sure we see them before we have to leave.
We met at the hotel restaurant for dinner, and then both headed to our rooms. I’m quite tired because I didn’t sleep very well last night, so I hope for a good night’s sleep tonight, and tomorrow we are scheduled to leave the hotel at 9 am for a visit in a village about two hours out of town.
Other Entries
-

Thanks for the pictures, especially the traffic. The photo makes clear how skillful your driver must have been to get you to the airport on time. The crumbling apartment photo--communicates a sadness, overwhelming circumstances? Hope all goes well in the village visit.

The deodorant story made for fun reading. Thanks for including that little tidbit of human interest.

Where is your venue in Benin city

Matthew, please reach out to me by email at thomas.clark@cogwa.org. I’ll be happy to discuss this further with you there.