A final visit, and then the trip home! 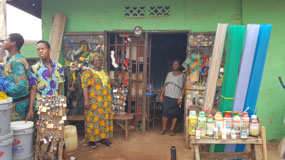 The Aghimien's store in Benin City
This morning Cody and I had time to get our bags packed and basically ready to go before Osas arrived at the hotel at about 10 am. We were able to make one last visit to his parent’ home, James and Bridget Aghimien.
On the way to their home we stopped off to see Mr. Aghimien’s shop. They run a small roadside hardware shop near one of the busy intersections in town. There is a lot of traffic past their store, which is always good for business! I’d never seen it before, so was happy to find out where they work. Mrs. Aghimien and Faustina, one of their daughters, were tending the store.
Then we traveled on to the house where Mr. Aghimien and most of the rest of the family were there. Rachel has been studying to be a midwife, and as part of her training she has been required to do a year of service someplace of the government’s choice. So she has been posted to Abuja, the nation’s capital city. She has spent most of her year there already, but was able to take a leave of absence to come back and travel to Kenya to serve as an FOI volunteer for their youth camp, which took place over the winter break. 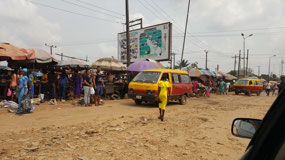 Busy market area near their store
She will not be going back to Abuja for at least a few weeks. The national elections in Nigeria take place in February, so she is going to be able to stay home at least until after the elections. Everyone is praying the elections will be peaceful.
After the visit Osas was able to bring us back to the hotel, where we both could finish packing, and chance into fresh clothes to begin the long trip home. Our flight from Benin City to Lagos was delayed twice, but we still had plenty of time. We arrived at the airport about 2:30 pm, and were able to complete all the boarding procedures smoothly and went into the lounge to wait for our plane. We boarded and took off shortly after 4 for the 30 minute flight to Lagos.
In Lagos we had to catch a cab to take us from the Domestic Airport to the International airport. They are two separate terminals just a couple of miles apart. We both were booked with Delta Airlines all the way home, but because he was flying through Paris, he had to check in through the AirFrance desk as they codeshare with Delta. 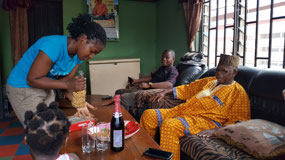 Visiting in the Aghimien's home
But we met up again once we were through security and enjoyed a drink, free wifi and something to eat in one of the airport lounges.
Our planes took off about 30 minutes apart, but from different parts of the airport, so we parted company and each headed to our gates, separate security procedures and then finally boarding the planes.
My flight was from Lagos directly to JFK airport in New York. The pilot announced that it is 11 hours and 10 minutes of flying time – a very long flight! I had a layover in New York before catching a flight down to Atlanta, and another layover before flying on to Fort Smith where my lovely bride was waiting just outside of security! From the time I got to the airport in Benin City until I exited security in Fort Smith I spent about 31 hours on planes and in airports. And I am very glad to be home and with my family once again!
I hope it is of some value for you to travel along with me via this blog. Thank you for your prayers and the kind comments that many of you made. So, until next time…
Other Entries
-

Very much appreciate your travel blogs. I will probably never travel to Africa so I really enjoy going with you vicariously. So glad you made it home safely. Until next trip may God bless.

So glad you are home safely after that long flight! Thanks for the photos that give glimpses of Ghana and Nigeria. Thank you also for blogging about your experiences and making us acquainted with the brethren there. It is a pleasure to follow along.

Always great to have an opportunity to know more of our brethren. Tks, for your blogs!

Though you had been in my prayers, this was my first opportunity to read through your blog. Thank you (and Cody) for this act of service. Travel is exhausting at the best of times and Africa does not always offer "the best." Have a well-deserved rest from the pace you've been keeping!

Hi Mr. Clark it's been reconnecting with you at the Kotoka international Airport after so many years. Cheers! Billey

Thank you Pastor Clark for your journey and thank you for helping us out with the delivery. You are doing some amazing work for the church. I look forward to hopefully meeting you again at the feast this year in Ghana. Sonya

Thanks for the extra effort to keep us all posted on Cody and your activities... as well as insight into our Church family in Ghana and Nigeria!

Thank you and your family for being so willing to serve and share in this way. Each view into our brethren's lives on this distant continent gives as a clearer understanding of the challenges they face and puts things in my own life into perspective.

I do enjoy reading your blogs. It is interesting to learn about our brethren in other area. Helps keep in mind how much we are blessed and to pray more effectively for them