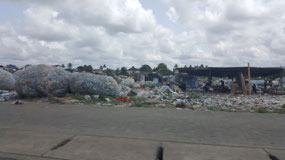 Mountains of trash on the roadside
The same driver from yesterday, Michael, was to pick me up this morning. He suggested I be ready to go at 9 am for the drive down, which I was. He arrived promptly at 9:45, and we were shortly on our way.
We currently have two baptized members in Lagos, but there are several others who have come into contact with the Church and are interested. Nandom and Noshi Vonshilli are our members, and they have two little boys, Domnan (age 3) and Domman (age 7 months). We agreed to meet at a hotel in what is called Satellite Town, a section of Lagos near the port. Only one of the interested people will be able to come this time, but I’ll be happy to see them and spend some time with them.
As my driver and I got closer we saw more and more big trucks (called lorries here) with the huge shipping containers on their trailers. And on the side there were freight yards with those shipping containers stacked two or three stories high! It is clear we are near a major harbor where a lot of freight passes through. 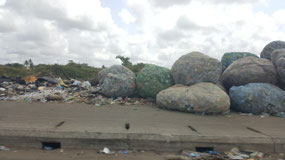 More trash with the huge bags of bottles
And as always, traffic was terrible – but at least it was moving a little bit.
The mounds of trash in both Ghana and Nigeria is astounding, but as we drew nearer the coast I noticed huge mounds and hugs bags of plastic, primarily plastic bottles. I can only assume these are being gathered to be shipped out someplace to be melted down and recycled. At least I hope that’s what they are intended for rather than being dumped out at sea someplace. That stuff seems to live forever in the ocean, and I’ve read several accounts of huge dead zones with “islands” in the middle of the ocean entirely made up of many tons of floating plastic and plastic bottles. I’d hate to think what I was seeing is destined to join these.
Andy Anochie, the only one of the interested folks who was able to come today, met us at a filling station to guide us the rest of the way to the hotel. Good thing, because I don’t think my driver could have found it, and I was completely lost!
The Golden Tree hotel is a nice enough place, and the dining room was virtually deserted, so it made a good place for us to sit and talk for nearly three hours. 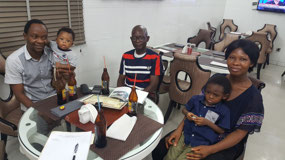 Our group (Andy in the middle)
I learned more of the life stories of Nandom and Noshi, including how they met. As it turned out, they used this very hotel for their honeymoon almost four years ago, so I think it has fond memories for them.
Andy has been studying some of the literature we’ve brought over, and he had several questions that we were able to talk about for some time. Some of the questions were:
·       Why does God require us to be baptized?
·       Is faith required? If so, how does one gain faith?
·       How do we prove God exists if we didn’t believe that before?
·       Why did Jesus Christ have to come to earth?
·       Is Jesus also God? Some say differently.
·       What should a Christian make of Halloween?
·       What about Christmas, can/should we observe it?
These questions and more gave us a lot to talk about. While Andy is still very new in the process of learning the Truth, it is also clear that he is eager to know and willing to study and learn. I explained that I too came to a knowledge of the truth, having to unlearn much of what I thought I knew about God and what He is doing, and then learn what the Bible really says. That is a process that takes some time, so don’t feel discouraged. We’ll be here to help answer questions and help him walk through this process as God calls and he chooses to respond.
I’ve commented before that traffic in Nigeria is quite a bit more aggressive than in Ghana. And perhaps one of the most dangerous vehicles to be on and aggressive with is a motorcycle – of which there are a lot here. Today on the drive back to the hotel that fact was brought to mind once again.
On a particularly bad section of road (which is saying something, since most if it is pretty bad) my driver was trying to avoid the worst of the potholes. He drives a Volkswagon Jetta, and we’d already hit the bottom of the car on holes two or three times today. As he jerked the car to the right to avoid a deep looking hole I heard what sounded like something falling over in the trunk. But within a few feet a motorcycle yelled at us and stopped crossways in front of us to stop us. It wasn’t something in the trunk, rather the driver had jerked over into a motorcycle who was trying to pass him on the right side next to the curb.
We had not yet dropped Andy off, so the two of them got out while at least four more motorcycles converged on us as well as numerous nearby pedestrians. I knew it would only make matters worse if I got out, so I stayed put and no one on the sidewalk “court” even seemed to notice I was in the car.
After several minutes of yelling, shouting, wild gesticulating, pointing to the damaged motorcycle and car and such, the party seemed to come to an end. One guy was holding his wrist, although I’m not sure he was even involved. But finally the driver and Andy got back in the car. The motorcycles all took off and so did we. The driver continued to defend himself as we continued back on the road, saying he can’t be expected to look behind or beside him when he dodges potholes. Maybe that’s the way it works in Nigeria, but back home I’m afraid it would have been a different story. But then back home I doubt the motorcycle would have tried to pass on the right up next to a curb, so…that’s just traffic in Nigeria!
My driver should return to the hotel between 8 and 8:30 in the morning to take me to the domestic airport so I can fly on to Benin City. So I’ll take care of a few things this evening, and make it an early night to bed. I’ve been sleeping well, but still need a good long night’s sleep!
Other Entries
-

Glad you're sleeping well on this trip and thankful for the updates you post. We will continue praying for a safe and productive trip.

Glad we can share your travels like this—more glad God’s angels are protecting you! Mind blowing to think about what some of our brethren live with. Thank you for your faithfulness and dedication to us all.

What a frightening drive with the potholes and motorcycle incident. All the plastic trash needs a global solution! Thanks for including Andy's questions. It is interesting to remember what we had to learn and unlearn.

We appreciate your support, encouragement, love and concern towards our spiritual growth and development. We also thank you and Mr Kitts as you guys took the time and resources and dared to visit us in our area despite the challenges. We pray the good Lord will continue to lead and see you through this humble service you render not only to us but to other brethren as well. Thank you, sir

Wonderful to be able to "join" these trips by reading from you. I miss Nandom, having met him on a trip to Lagos back in 2016. Such a graceful fella. Appreciate all the work being done, as well as sharing with us. Thank you.

Thank you for introducing us to this family! I love their questions! PS - Don't believe Nathan.