-
Yesterday I decided not to leave the hotel. I started feeling better, but not well enough to travel out and about. I did have two members who came to the hotel to talk, and between the two of them we spent over 3 ½ hours discussing various things, from local questions to doctrinal questions. It was profitable, but I felt badly that I wasn’t able to get out and travel.
But I was feeling stronger this morning, and asked Osas if he could come and get me to visit our two oldest members, two widow ladies. Esther Igdaliah and Beatrice Iyamu it turns out have known each other since primary school as little girls! They grew up together, and years later God called them into His Church together too! It is a wonderful story. They were both baptized in the early 1970’s, and are two of the members who have been keeping the Feast for more than 50 years in Nigeria. They are also only 3 months apart in age, Mrs. Igdaliah being the elder by 90 days.
I’ve been in both their homes several times – in fact I believe their homes were the first member’s homes here I came to. At just short of 80 years old, both are an absolute delight! Mrs. Iyamu is functionally blind, and is almost entirely deaf as well. She has a large “hearing aid” she has worn in the past, but she complained that is was making her ear sore, so she just goes without. It is her left ear that can still hear some, and I have to get right down to her ear so she can hear me.
And she always wants to sing for me, and asks if she can. Of course she can! I captured a short video clip, which I will try to attach if possible so you can both see and hear here.
Traffic here always amazes me. I’ve driven in Ghana in several occasions, but I refuse to drive in Nigeria! As Osas comes to a stop for a red light, other cars and trucks blow their horns and go right on through barely slowing down! I commented to Osas that I have no idea why the Nigerian government bothers to waste money on traffic lights, because nobody pays any attention to them, or to lane markings, or frankly to which side of the road one is supposed to drive on! He said if anyone gets caught breaking a traffic law, you just pay the police a small fine and go on your way. So no one has any incentive to obey the law. I’m pleased to note Osas will always stop for a red light!
Tomorrow Osas will come get me about 11:00 am, and services are scheduled to begin at 11:30.
Other Entries
- 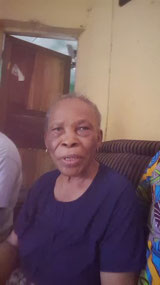 That was beautiful Mrs. Iyamu. Thank you!

What a wonderful way to begin the Sabbath, listening to Ms. Iyamu singing, knowing all the words. A real inspiration! Glad that you are feeling better, Tom, and hope all continues to go smoothly. Oh, the driving, even hearing about it!

I've actually seen the police pull local drivers out of their vehicles and beat them with a horse whip for violating their traffic commands.

Thank you for sharing this video! What a lovely lady and I completely teared up!