-
I slept hard until about 2 am when the phone rang. It was a text message only, but it woke me up, and I had trouble getting back to sleep. However, I did, and was still sleeping hard when the alarm went off in the morning. It was tough to drag myself out of bed, but I had to get going.

I went down for breakfast, and then asked the front desk to arrange a taxi to take me to the VIP bus station 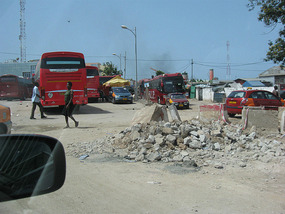 VIP Bus Station in Accra
. These are generally pretty nice busses that will take me from Accra to Kumasi. I was pleasantly surprised to learn that because I've stayed at this hotel so many times they are giving me an automatic 20% discount on my room rate! That is nice, and appreciated!

After finishing packing and settling the bill, we set off in a fairly nice Toyota sedan with good working a/c. One of the hotel employees moonlights for another company driving for them. It doesn’t look like all the other taxi’s with yellow fenders, so when we stopped at the Shoprite Mall so I could visit the forex bureau to change some money, he was able to park up close. The mall police require all taxi’s to park at the far end of the lot, and they can only stay a limited amount of time.

The exchange rate was another shock. The strength of the Ghanaian cedi is in rapid decline from the dollar. It was just about 3 to $1 when I was here four months ago. The rate I got today was 3 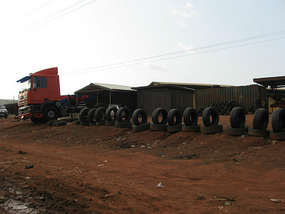 Local tire and auto center!
.75 to $1. That does not spell good things for Ghana. Petrol (gasoline) has remained steady or even risen. It is now the equivalent of about $3.80 per gallon, and some stations are more than that, approaching $4 a gallon.

I was able to buy a bus pass and got on the bus with no problems. This is a trip I’ve taken a number of times, and riding the bus is a good way to do it. The busses are generally comfortable and have a/c. This one had limited cooling for some reason, but it was still considerably better than the outside air!

Traffic in Ghana flows favor of the most aggressive driver, or the biggest vehicle. That definitely tips the odds in favor of these huge motor coaches! It doesn’t mean we were able to get out of Accra easily, but when the driver points the blunt nose of the bus at the road and gives it a little gas, nearly everyone else lets him go. I don’t blame them, because no one has any idea the condition of the brakes on any vehicle on the road…

As we reach the outskirts of Kumasi about five hours later, we pass within less than half a mile of my hotel. Rather than going all the way into downtown Kumasi and then having to hire a cab and fight the traffic all the way back out, I was able to arrange to have him drop me and my bags off on the side of the highway. Two other passengers got off at the same point. After getting across the highway (sometimes easier said than done) it was a simple thing to pull my bags down to the hotel. The suitcase in on wheels, and my other gear sits in or on the rolling bag. Interestingly, one lady part way down ran out and wanted to help me pull my bag. I thanked her kindly but declined. As I neared the hotel the security guard ran out to offer the same thing, but by then I was within sight of the front desk, so I thanked him and again declined.

When I entered the lobby I knew something was amiss. The lights were all off, and the TV on the wall – the one that is perpetually on probably 24 hrs a day – was dark. Sure enough, we have no power. I checked into my room and changed out of soaking wet clothes into dress pants and a Ghanaian shirt for Bible study – but neither stayed dry long.

Reuel Dima, one of our pastors, arrived at the hotel within 30 minutes of my arrival with a taxi to take us to the Bible study. Good thing the bus dropped me off early! We had a very good conversation in the car, talking about the state of the Church and some of the challenges that are faced. Much of the conversation revolved around improper or incomplete understandings of some of the teachings of the Church. I’ll have time to discuss some of these very important matters with all the pastors when we get together in a few days.

Some of the problems come from lack of education. There aren’t many of the members who are literate enough to read the Bible, or study Church literature. Since English isn’t their first language, it is more of a struggle for the pastors themselves to read and study Church literature in conjunction with the Bible. But that is much of my goal on these trips – education and helping bring up their level of understanding so they can help the members. When attitudes are good and humble, teaching what they don’t know is really the easy part!

It took about 90 minutes in heavy Kumasi traffic to get to the home of some members on the north side of Kumasi, where we’ll have the study. A short time later the 21 of us settled in plastic chairs out in the yard for Bible study. With no power, they said it would be unbearably hot inside, and they opted for sitting out of doors where we might at least get a slight stray breeze. Good call so far as I was concerned!

Earlier this morning, and on the bus, I had finished my notes for the study, intending to print them off when we reached the hotel. With no power, that was not an option. So, hoping my battery would last, I read my notes off the computer itself. Many thanks to Jerry Rehor, who works with our computer stuff for the Church, on that account. My computer’s battery completely failed a few months back, and he heard about it and helped me get a new one, and an extended charge one. I turned the screen brightness all the way down to conserve power, and it did just fine!

The study was on the third commandment, not taking God’s Name in vain. As we discussed it is important how we use God’s name in conversation, and the abuse and misuse of God’s name is nearly as common in Ghana as it is in the West. I haven’t noticed it as much, but then much of the time they’ll be speaking in Twi, and I won’t catch it all. But there is something much deeper included in this command. Paul described how by our behavior we – who represent God and Jesus Christ – can cause others to blaspheme God’s Name. His comments in Romans 2 are likely a reference back to David’s experience in II Samuel 12. It seems that point had a particular impact on the brethren.

By the time we finished it was completely dark. In fact, one of the teen boys had to come up with a portable light so we could finish the last couple of scriptures. I always have the man translating for me read the verses from the Twi bible, and I don’t have a version of that on my computer, so he had to read from a book, which required the light. We finished as the mosquitoes settled in and then everyone started heading home.

The problem of electrical power in Ghana is quickly getting worse. The brethren told me they have been promised power would be on 12 hours and off 24, but they aren’t even getting that. They hadn’t had power at the house since yesterday afternoon sometime.

It is not just Kumasi, but country-wide. My taxi driver in Accra commented on the power outages in the capital city. Just imagine the impact that is having on business and the fairly fragile economy. Politicians are all promising to fix it, but no one believes any of them anymore. The interior minister has pledged to get the power grid fixed by the end of summer of he will resign. We’ll see how that goes…

From the house we walked down the deeply rutted dirt track that passes as a city street out to a main artery where we might catch a cab. That took a bit, as the first two cabs were not interested in taking us as far as we needed to go. The third finally agreed, five of us piled in the cab and began the ride. Part way there we stopped to let Reuel, his wife Esther and their little girl off. They needed to go on south while we started east. At least 90 minutes later the taxi dropped me off at the hotel, and the last member was going on to his home.

The hotel was still dark, no power. They have a large diesel generator sitting on the side, but like all things mechanical, it has broken down. There is a promise that it will be fixed tomorrow, and I can only hope that promise will be kept better than the one from the politicians…

I chatted with the waiter in the darkness about the problems they are facing. He said the power problem is #1,and businesses are being devastated because of it. Companies are laying off workers, and some have closed their doors. This hotel, the Royal Basin, is a nice little hotel I like to use when I’m here. It is a 21 room hotel, and tonight 20 of them are vacant. Tourist traffic is way down, no one wants to gather in nice meeting rooms with no light or a/c, so they’ve had to lay off employees too. The Ghanaian people are a gentle natured people, but if something doesn’t change soon, I fear they are going to stand up and force a change. Social unrest can come to even peace-loving people.

I’ve not eaten since breakfast, but the dinner fare is slim with no electricity. I was able to get some plain rice with either chicken or fish. I couldn’t be sure the kind of fish, so I opted for the chicken. That tough old bird had obviously lived a long life before becoming my dinner, but it was food. Somehow they had been able to keep one of the locally brewed beers cold, and that helped in the sweltering restaurant!

Back in the room I decided to take a cold shower – something I dread with a passion. But I have to admit the cold water felt almost refreshing! With no way to charge up my phone a call to my beautiful wife seemed unwise, so we sent a couple of texts and I tried to lay down on the bed without touching anything and hoped from cool to come.

About 10:30 the room lights came on – much to my surprise! Since they couldn’t have fixed the generator, I assume power was returned to this area. The a/c unit only produces kind of cool air, but it is 1000% better than before, so I’ve got it on full-blast and hoping to cool down the room before we lose power once again.

Tomorrow morning I have the morning to work here in my room – but we’ll see how much I’m able to accomplish depending on power, and hopefully access to the internet. Then Reuel is scheduled to come back about 2 pm and we’ll begin our journey down through Obuasi and out to the tiny village of Mile 9 for a Bible study tomorrow night.
Other Entries
-