-
Last night was a very poor night's sleep. The a/c unit never did accomplish much, so this morning they moved me to another room. Power came on about 10:30 last night and went out at 7:30 this morning. Not much work could be done with no power to keep the computer going.

Reuel Dima called and we talked about several items, and he arranged to meet me at the hotel at 2 pm to start our journey out to the village of Mile 9 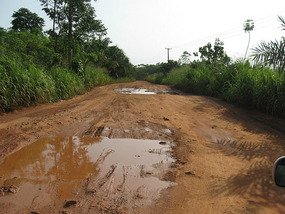 The road from Obuasi to Mile 9
. He was on time with a taxi driver from near his home with whom he has been talking. The driver, Michael, is somewhat interested in the Church.

The drive took 2 ½ hours primarily because of terrible traffic and even worse roads. I was able to take several photos of the roads, but the SD card in my camera is having problems, perhaps failing. I don’t know if I’ll be able to salvage any of the photos…

On the drive Reuel and I had more time to discuss things pertinent to the Church in Ghana, and address some questions. He asked about cremation, which we were able to discuss at length. We also talked about gifts God has given to various men, and how He has orchestrated it so it seems the right man is in the right place at the time He needs them there.

I gave the same Bible study on the third commandment. In total there were 19 present including the children. Two of the men are not even church members – one was our taxi driver, and the other was the brother-in-law of a member family 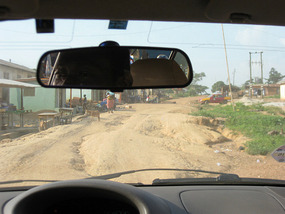 City street in Obuasi
. Both publically expressed their appreciation for the study at the end.

After the study a couple of questions were asked including one that has apparently been bothering some in this small village. There are a group of "religious" people here who are preaching that when Adam asked God to create Eve, God warned him that the woman was going to be a curse to him. It was clearly bothering the lady who asked.

The answer starts with the fact that Adam did not ask for Eve, rather God created Eve and presented her to Adam to be a helper comparable to him (of the human kind like all the animals had mates after their own kind). I explained how my beautiful wife of nearly 30 years has been the prefect compliment to me. She has strengths where I lack them, and in theory I have some strength where she might lack it. But we make a good team, and I could not imagine going through life without her. God intended the man and his wife to cleave to each other as “one flesh” for life 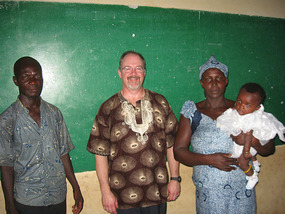 Baby Gladys and her family
. Woman was not and was never intended to be a curse. There may be individual exceptions, but then that one would go both ways…

The sister and brother-in-law of one of the guests also brought their newborn daughter – her first time to Church since birth. They asked if I would do the blessing of little children for tiny Gladys, which I was thrilled to do. Neither of the parents speak much English (and obviously the infant doesn’t either…) so I doubt they understood much from my prayer. But they expressed that God isn’t bothered by the languages, and it is His blessing they wanted!

On the trip back our driver, Michael, asked about a deeply personal and troubling situation taking place in his own family. After hearing through his situation I went first to the writings of Paul where he addressed this kind of problem, and explained what the clear biblical teaching and the Church’s position is. He responded that this was the first time someone had addressed it with scripture. Other church’s take a very different approach, and it was deeply troubling him. At that point he told us that he now thinks he needs to quit going to Church where he has been, and begin attending with us! We’ll see how that goes. He seems to be a deeper thinking individual, and it may be that God is indeed drawing him to Himself. That would mean it was not happenstance that he came by right when Reuel was trying to find us a taxi…

The return trip took another 2 ½ hours, and we arrived back at my hotel just before 9 pm. I had called ahead to ask of the kitchen would prepare a meal for me since they close up shop at 9. It was prepared and waiting for me, which I greatly appreciated. I had asked for the same “fillet” I have had here before, which is a rather tough piece of beef well flavored and with lots of garlic. It is difficult to get too much garlic on a piece like this, but the one tonight came close. However, it was very much appreciated, and I cleaned my plate. I just hope my garlic breath doesn’t melt the bristles of my toothbrush tonight J.

The lights are on, and the a/c in my new room is working like a champ, so I’m anticipating a good solid night’s sleep. The internet is still down, however, so I can’t check email or post these blogs. If it still is down in the morning I’ll have to find an internet café and try to get connected.
Other Entries
-