-
I slept very well last night, and woke up this morning feeling pretty good! The power stayed on all night, so the a/c worked well all night. After breakfast I had plenty of work to do, and having power helps, but without an internet connection I'm still handicapped. 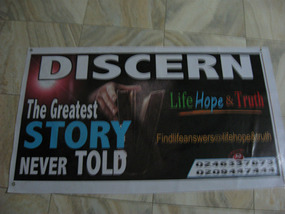 An advertising postor created for the Kumasi area
. However the power kept going off and on – five times over the course of the morning. Finally about 11:00 am it went off, probably for good for today. It quickly began to get stuffy in the room.

The big diesel generator is still not fixed in spite of promises that it will be running "today". Apparently some parts have to be ordered and shipped in. It could be days or even weeks before it is operational again. Facing the prospect of another hot night with no power was discouraging.

About noon I heard a small generator being started outside near the pool. Perhaps they have brought in something that will keep lights on and perhaps run the a/c…but no such luck. Within minutes what must pass for music started playing down by the pool, and then they hit the volume. The small generator was to run that sound system, and it must have been pretty powerful to drive a thumping bass strong enough to crack concrete 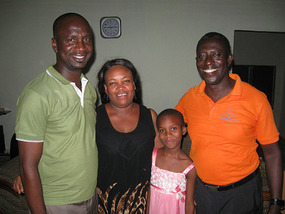 The Dima family with Eshun Plange in orange
. A party was starting that could go for hours. That was the last straw.

I walked out front and hailed a cab to take me to another hotel I’ve used a few times, only a couple of miles away. It might not be any better, but it was worth checking out, and I have nothing to lose but a little cab fare.

The Silicon hotel also has a big diesel generator, but theirs is fully operational. They have a room at nearly the same price as the Royal Basin, and their internet connection is good (well, good by African standards, which means you can get connected). This decision is a no-brainer, so I had the taxi take me back to the Royal Basin where I packed my bag and went up to settle the bill. It was higher than it should have been, but at this point I just wanted to cut my losses and move on, so after a couple of questions I paid and we left.

Reuel was already on his way to pick me up, so I phoned him to tell him of my change of location. I got checked in and shortly afterward Reuel, Eshun Plange and the same driver from last night appeared.

We went across town to Reuel’s house. It is a nice place (which I forgot to take pictures of) and we enjoyed the rest of the afternoon and early evening. Esther, Reuel’s wife, provided a tray of chopped fruits and vegetables – avocado, banana, apple, mango, paw-paw and so forth. All of them extremely fresh, maybe only hours or a couple of days off the plant!

There was more church business to discuss, including some heavier and more difficult problems. It was good to have the time to talk them through, and begin to map out the best approach. By the time we’d finished the fruit and concluded our discussions, it was getting dark, and time for me to head back to the hotel.

As we left lightning was flashing nearby, and the smell of rain was in the air. Sure enough, within a few minutes it started raining, and then really cut loose! Every road (or parts of roads) that aren’t paved turned almost immediately into a slick reddish brown muck. Potholes are much more difficult to spot when standing or running water is all over! And the rain snarls the already bad traffic even worse, because of bad windshield wipers, lack of effective defrosters, slick roads and a general increased hesitancy. But we made it back to the hotel with no problems shortly after the rain came to an end.

The Silicon hotel restaurant is rather limited in potential fare, but that isn’t my biggest concern. I ordered a chicken club sandwich and prepared to turn in for the night. The van is to be here by shortly after 4:30 am for us to make it out to Sefwi in time for Sabbath services. I’m uncertain what the drive will be like, especially if this rain hit the really bad roads we are going to have to travel – and this van is not four-wheel drive. But I’ll trust the local guys to make the decisions like this on vehicles. I suppose the worst that could happen is that we get stuck in a mud puddle in the middle of the jungle…
Other Entries
-

Thanks for the updates! Please give our love and regards to everyone you see from all of us here at the office. Travel safely!