Long day to Sefwi and back

-
I think the thing I hate most about insomnia is not being able to sleep... I'm plagued by it periodically, and it struck last night. Don't know why, the room is comfortable, I was certainly feeling tired, but after sleeping about an hour I was awake and never was able to get back into a deep sleep. I napped a little and spent the rest of the night awake. Not a good beginning to what will be perhaps the longest and most physically trying day of the trip.

Since I was already awake, I just shut off the alarm before it went off at 3:30 am 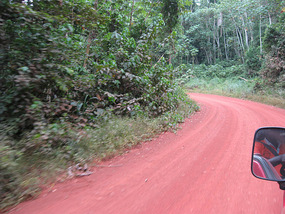 The road to Sefwi
. Reuel and his family along with a driver and a tro-tro mini van were to arrive shortly after 4:30 am, which meant no breakfast, because that wouldn't open for another couple of hours. I was down waiting for them at 4:30, but it was closer to 5 before they arrived.

That time on a Saturday morning gave me a glimpse of the lightest Kumasi traffic I've ever seen! We made good time getting west of town on the Sunyani road, but shortly after leaving the main part of Kumasi we turned left and started heading basically straight west, toward the boarder with the Ivory Coast.

Exactly as I remembered it from a few years back, the road started out with normal pavement - just dodge the pot holes and slow down over the speed bumps. Then about two hours out the pavement ended and we started out on a fairly wide dirt road. This is where our driver's ambitions to be a Baja race drive emerged. But rather than driving a sooped up 4WD race car, he was driving a diesel powered Nissan minivan 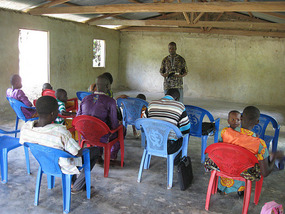 Reuel Dima giving the sermonette
. But he apparently wasn't bothered by the details, just launched us down the road.

This shake, rattle and roll routine continued for the next 2 1/2 hours as the road conditions continually got worse. Not long before we reached Sefwi the road was little more than one lane wide as it would up, down and around in the hills. Our driver would lay on the horn before every hill and every curve to alert any oncoming traffic that we were careening recklessly toward them. By the time we arrived I was starting to feel a little punch-drunk from all the jarring down the road.

A big plus for us was that the heavy rains we received in Kumasi last night did not apparently reach this area. Some of the dry pot holes we drove through were easily long, wide and deep enough to have made some spots virtually impassable in a van like ours if they were full of water.

The mining industry in Ghana is best known for gold, and Ghana is Africa's second largest producer of gold 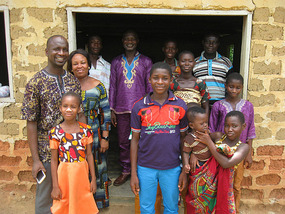 The Sefwi congregation with a visitor
. But the large hills/small mountains we drove through also contain rich deposits of baxuite and mangenese as well as some mostly industrial-grade diamonds. We were able to see a little of some of the mining operations as we bounced along the road. At this point it was probably baxuite or mangenese.

By the time we arrived in Sefwi at about 9:30 am the clouds had all burned off, and the heat and humidity were intense - it was going to be a warm morning! The trees around the Church building have grown considerably in the 5 or so years since I was last here, and the shade over the sheet metal roof is a good thing.

About 20 minutes after 10 we began services with a baker's dozen of us present. Reuel gave a sermonette on learning and following God's commands, and then his wife, Esther, brought the special music, an acapella vocal solo in the Twi language.

I once again presented the message on the 3rd commandment

The village chief
. There were at least two visitors in the audience, and one is a leading member of the community and son of the town chief. Part way through the sermon he reached for some paper and began motioning to others around him for a pen. No one appeard to have one, so as Reuel was reading a scriptural passage from the Twi Bible, I walked over to my bag and got him a pen. He then listened and rapidly took down notes for the rest of the sermon. I suppose he might have just been putting together a grocery list, but it made me feel warm and fuzzy to think that he might have been jotting down scriptures and thoughts from the message. Actually, I was already feeling warm, so perhaps that was just the fuzzy part...

Our driver was due to come back for us by 12 noon, so we finished services, snapped a quick picture and we started walking back toward the road, greeting several villagers along the way and trailing a handful of children.

Before getting back in the van Reuel suggested we stop and see the village chief. He has been very supportive of the Church, even donating the land to us on which our building sits. Reuel knocked and then motioned us all in. The chief said he is 75, and he is the descendant of the ruling family of this area. He was very gracious in receiving us, and seemed genuinely surprised to see an obruni (white man) in his village. I don't suppose many obrunis visit this far back in the jungle! He agreed to a photo, but only after he sent for and put on a dress shirt. We shook hands all the way around, and with parting nods of respect we were back in the van and on the road.

We took one family with us as we must drive right past their place, and dropped them off. Two other men, who were apparently friends of the driver, asked if they could catch a ride with us back to Kumasi. Everyone loves free transportation, but we had room so it was no problem.

The return trip was a reverse carbon copy of the trip out: really rough part first and then the relatively smooth roads to finish up. The only difference was the level of traffic once we hit the outskirts of Kumasi. But our driver knew some sidestreets and "shortcuts" to get us around. There is no way to tell how much time he might have saved, but we arrived back at my hotel at 5:30, nearly thirteen long, hot and bumpy hours after leaving.

The menu at the hotel restaurant listed "cheeseburger" which sounded deliciously fattening, so I ordered one. I was told it would take an hour to prepare it (guess they aren't planning on putting McDonalds out of business...) so I decided to head to the room and asked to have it brought up.

Forty minutes later the girl knocked on the door to tell me they couldn't do the burger, but suggested I go for the spaghetti with vegetables and beef. You know, perhaps I can short circuit this process in the future if I just ask what they have rather than trying to order something I might want... She said it would be ready quickly, and sure enough, a full hour (and a small nap) later she returned with my tray of food. It was late, but tasted good and filled me up.

Tomorrow begins a day and a half of meetings and lectures with the pastors. I've arranged for a taxi to be here at 8:15 to take me over to the location of the meeting. That should give me time to get the computer and projector set up in time for a 9:00 start. I did emphasize 9:00 obruni time, not Ghana time. That's an old joke between us, and they laugh but do understand the desire to be more punctual than might be natural.

I have appreciated reading about your trip. Thank you for being willing to travel a long way and in trying circumstances to see the brethren, as well as, to teach and train the ministry to be better servants and teachers. Hope you get some much needed rest tonight!!