Day of Meetings with the Pastors

-
The alarm jarred me out of a very sound and deep sleep this morning. I showered and got ready for the day, heading downstairs for breakfast, which was to open at 7:30. The same waitress from last night was still on duty, and I commented on her long hours. She said she sleeps at the hotel and is almost always there. I asked if they give her a room, and she said no, after the restaurant closes for the night, she pulls a small mattress out of storage room someplace and sleeps on the floor of the restaurant. Apparently she has no place else to go, but she has a job and is making the most of things.

I had asked for a cab to be here at 8:15, and he was there and ready to take me over to the Mystical Rose, a guesthouse that is much nicer than the average, and it has an air-conditioned conference room 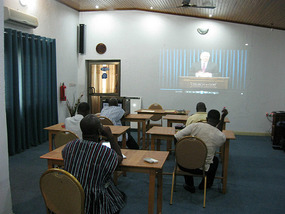 The pastors watching Mr. Franks's presentation
. We used it two years ago, and it worked well. They've improved it now, and have a built-in sound system and a projector fastened to the ceiling. All I needed to do was hook up my computer and we were ready to go.

Initially I needed to cover some administrative matters, and I wanted an update from all the pastors on their recent transfers. This uncovered some matters that took quite some time to discuss and sort out. What I'd intended to take perhaps 30 minutes took almost 3 hours. That's OK. We aren't in a race, and I'd rather know about and have the chance to work through problems than to let them build and fester only to come out later. I believe it was productive time well spent.

After that I played a video from Mr. Franks that he used at the Young Adult Leadership Weekends on Unity. It is very appropriate for the time and our ministry in Ghana. It was very well received.

During the lunch break the fellows all walked out to the main road to buy some food from the little chop bars along the road. That is common Ghanaian "fast food", but not the kind of thing westerners would normally eat. I stayed in the room to get ready for the afternoon sessions and also make a quick call to my wife, since she was up by that time. (She doesn't sleep until noon, the time difference was the problem!).

We started back in at 2:00 after a one hour lunch break, and I gave a presentation on Pride and Humility in the ministry. As I went through the material several questions and a fair bit of discussion was engendered. I've always felt this kind of discussion is some of the most valuable of the entire time. In the end, what was supposed to be an hour long meeting turned into 2+ hours. I won't be able to cover all the material I had intended, but I still feel the time is going to have been very well spent.

To finish up I played Mr. Kilough's YALW presentation on "When Leaders Lead". Not all of his points directly applied to the Ghanaian ministry's situation, but the points were powerful and relevant enough that it was a profitable message for them to hear. I made sure the had funds for dinner and I walked out the main road to hail a cab back to my hotel.

Tom, I am concerned that this once shining light of an African country is having serious problems. (Is there some place in the world that isn't?!) But it is encouraging to hear of the attitude of our pastors, which will translate into the same attitude for our congregations. I pray your electronics work as needed (!) & for your continued safety.