Final day of classes with the pastors

-
As I laid in bed for the last few moments before getting up and beginning to prepare for the day, the power went off. I hadn't heard the sound of the big diesel generator all night, so it seemed we were actually on the power grid. That came to a halt, and I waited for the generator to start, but it didn’t.

The bathroom in my room is off to the side, and without lights it is rather dark 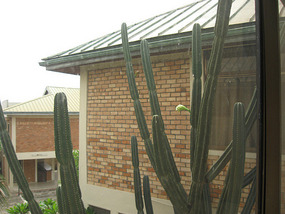 Two-story tall cactus at the hotel!
. Showering in the dark is not a real problem, since I have my eyes closed part of the time to keep soap out anyway. However, shaving in the dark is a bit more of a problem. There is a small mirror in the room, so I was able to put shaving cream on at the sink, then step out and shave a stroke or two, return to rinse the razor and repeat. When I was done, so far as I could tell, I didn’t miss any large spots, my sideburns are both approximately the same length and my goatee isn’t lopsided – not bad considering the circumstances!

After a quick breakfast the taxi was again ready and I went over to the Mystical Rose guesthouse for the last morning with the pastors. Their power was also out, but the generator was going, so no problem. Just before we started I heard their generator shut down and the lights flickered then came back. Wow, back on the power grid so soon, that was good!

I started off with something light, but very inspiring

The Silicon Hotel
. I have a short video clip lasting just a few minutes titled "Creation Calls". The song is neat, but the cinematography is outstanding, showing scenes from all over the world of breathtaking beauty. It seemed a nice way to start, focused on the wisdom power of the God we worship!

I had three presentations I wanted to give today, but that was not going to be… I’ve been asked even recently several questions about the Passover, preparation for it, who can take it and so forth, so I had prepared a message along that line with some powerpoint slides. This isn’t the Passover time period, but Paul wrote about preaching the word “in season and out of season” (II Timothy 4:2), so this was going to be a message slightly out of season.

I had planned an hour for this topic, but as we went along the subject inspired quite a few questions and discussion

The street in front of the Silicon
. Once again, I feel this is some of the most productive time we can have, because they are engaged, thinking everything through and then seeking clarification on points they don’t quite understand. And it is a growth process: this isn’t the first time this topic has been addressed, not even the first time I’ve discussed aspects of it. But sometimes if knowledge is low one may not even understand enough to ask some of the questions that need to be asked. So I didn’t mind taking the time and slowing working through the questions and answers. Sometimes the real matter is not presented with the original question, but I’ve found if I’m patient, hear the question through and then listen carefully at the response the core question or situation will come out and we can then address it. As a result, of the 3 hours we had this morning, this presentation took up 2 ½.

As it turned out, it was just as well. The two remaining presentations were a YALW presentation by Mr. Horchak and a review of the Life Hope and Truth website and using it for research and assistance with sermon and Bible study preparation. But literally moments after I finished my final slide and went to the blank screen the power went off and did not come back on. Neither did the generator. So I finished some final housekeeping items including giving them the funds they need for their transport back home, and I closed the meetings with a prayer of thanks and seeking God’s protection and continual blessing on His people.

Back at the hotel about 12:45pm I decided to order a sandwich for lunch. I was told it would take 30 minutes, so I went back to my room to work. The generator was humming along nicely, so there was power and a/c in the room! At a little past 2 pm I finally decided they had forgotten, and was going to tell them not to worry, dinner would come along shortly and I’ll eat them. But the cook begged me to be patient, because they were out of lettuce for my chicken club sandwich, so she had to go to the market to get some and was almost done. 20 minutes later she brought my sandwich. Oh well, I’ll eat a little later and perhaps lighter than normal.

This afternoon is to be a time to work. I get home late Friday afternoon and have a sermon to give in two of my congregations on the Sabbath, so I need to work on the message. There is also an article I’ve committed to writing that I need to get started on. However, the generator just went silent, and with it the lights and a/c. The front desk said it would come back on today, but we’ve heard that before. Guess we’ll see. Meanwhile I’ll work as long as I have battery, and “enjoy” the room as it heats up!

Tomorrow I am to travel up to Yeji, a provincial capital sitting on the banks of Lake Volta. The VIP bus company I bring up from Accra doesn’t run up there, so it limits my options. The local buses are typically very overcrowded, and stop regularly to load and unload passengers and cargo including large bags of charcoal, bunches of banana and plantain, jugs of palm nut oil and even live chickens and goats (sometimes the goats are tied up on top of all the cargo that is tied on top of the bus). This slows the process down considerably not to mention that starting times are rather flexible. So Reuel has arranged for the same taxi driver who took us to Mile 9, Michael, to pick me up and take me to Yeji. He’ll spend the night and then bring me back on Wednesday so I can catch the VIP bus to Accra. It will be more expensive than using the local bus, But ultimately I think it will be worth it.

I went down to check on the bill and make sure I have enough money changed. It was going to be very close, so I suggested I pay the hotel bill in US dollars, given the exchange rate I received last week of 3.75. The owner of the hotel said no, he would give me only 3.00. So I hailed a cab and went to change a little more money.

When I explained to the taxi driver (the man who took me to the meetings yesterday) what I wanted he knew right where to go. We drove over to a Muslim area of town, which is where you will always find the black market money changers. Black market changers does not mean they are illegal, just that they operate outside of the traditional banking structure.

The two men came up to the car when we stopped and offered me a rate of 3.82, which I accepted and changed a little more money. Sadly, if the owner of the hotel hadn’t been a little greedy he could have come out money ahead by accepting what I originally offered him…

I will probably not be able to post to the blog again until I reach Accra sometime late on Wednesday. I do not anticipate having internet access in Yeji.
Other Entries
-