Michael had promised to be at the hotel by 9:30, and he was there on the dot! He was so concerned about having a good ride for me that he washed everything – including the upholstery and the seats! The seats are leather (or faux leather) and were dry, but all the cloth on the doors was still dripping wet 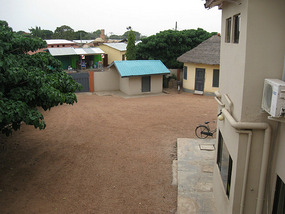 Balcony view from the Anini Hotel
. I had to smile and appreciate the thought and effort he put into it!

Since he did not know a shortcut over to the Yeji highway, I offered to show him. This would save us quite a bit of time, because we would avoid much of the heart of Kumasi and all the horrendous traffic we would fight there. If we went through Kumasi we could expect at least an hour perhaps more before we could be clear of the city and begin making progress north. The way I showed him led us immediately out, and then cut through the countryside over to the highway within 10 minutes or so. He was impressed that I could show him another way around.

The highway up to Yeji is actually pretty good highway. There are many two-lane highways across America that would be comparable to this one, with the exception of the often large and imposing "speed bumps" placed across the road at every town. These are to slow down the traffic, since most drivers will go as fast as they can no matter town or highway 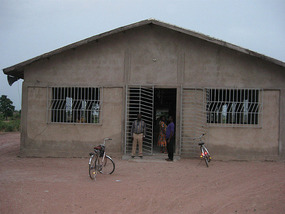 The Church hall in Yeji
. It also serves to create a side business of after-market parts from everything that falls off passing cars and trucks as they make it over. It is not unusual to see a “muffler tree”, or a branch or table with various mufflers and parts of exhaust pipes sticking up like tree branches. Creative marketing. (I tried to capture a picture of one, but failed. Perhaps on another trip).

We arrived in Yeji about 2 and Ofori Amanfo, the pastor here, met us at the city limit to lead us to the hotel. We checked me into the Anini hotel, a place I've stayed on several occasions. It is decent, and my a/c actually works. There is a small water heater in the bathroom, but I won’t get too excited about that – they’ve never worked before so I won’t expect too much. Translated into US dollars, the price for this hotel is $13 a night, and it’s the best thing in town.

Ofori and Michael went off for a couple of hours, planning to come back and get me before the Bible study 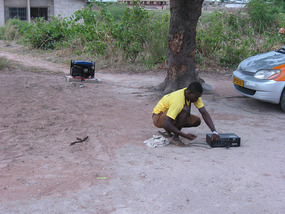 Generator and amp - outside on the ground
. I was a little hungry, so I walked down the street to find something. I bought a tin of sardines and two boiled eggs. The sardines are sealed and should be no problem, and the eggs are still within their shells, so again no problem for me to eat.

I asked if the eggs were boiled and was assured they were, so it was with great disappointment in my room that I cracked them to find I had purchased raw eggs – and no means to cook them. Oh well, the sardines were good, and my lovely wife always packs me an array of cereal and protein bars, so I have plenty to tide me over.

It had been advertised that the Bible study would start at 5:00 pm, and Ofori suggested he come pick me up at 5:30 because “the members will not be there”. I suggested he pick me up at 4:45 so we can at least be there on time. At 4:45 he called and said no one was there, so I should wait till 5:30.

We arrived at the church building a little before 6 to find about 10 people gathered. We stood and talked until about 6:30 and were ready to begin when the generator quit, meaning all the lights went out. As some assessed the problem with the generator, a member named George wanted to talk awhile. He asked how long I’ve been coming to Ghana, and remarked that he was here in Yeji on my very first trip in 2006, and remembers me from then. In fact, he reminded me of an English language Bible I gave him several years back, and he still has it, uses it and treasures it because it is the Word of God. Very neat and encouraging story.

Meanwhile, the men worked and worked on the generator to little avail. Apparently things work in Ghana just like they do in the States: something breaks down (car or generator), one or two men know what they are doing, but many others all gather around staring at the recalcitrant machine with looks on their faces as if they have a clue what all those parts really are and what they do… Perhaps just by force of so many staring at it the car or generator will be embarrassed into starting and working properly. That doesn’t work at home, and it didn’t work here either. They kept at it until shortly after 7 (2 hours after the scheduled time to start) when we decided to begin by flashlight, and I brought the same message on the Third Commandment.

The Church building has been improved on since the last time I was here. Now they have nice iron bars over the windows and doors, which means the chairs and equipment inside is secure. Prior to this, someone had to store all the plastic chairs in their home, and for services and Bible study I would see people on bicycle or motorcycle driving through the field to the building carrying a stack of chairs. Now they can leave them locked up in the building. And a wooden box has been built in the back in which to store the speakers and amp, which also can be left in the building with confidence. I suppose the biggest danger to them now would be a heavy storm that might blow rain onto or down into the box, harming the electronics. But so far that doesn’t seem to have been a problem.

Perhaps 20 minutes into the study the generator was started, and we finished by electric light. When the lights came on the moths, gnats and probably mosquitoes came in by droves, attracted by the light. Within moments there were several other creatures swooping back and forth just above the heads of the brethren – bats! No one seemed to mind at all as the bats flitted noiselessly through the building feasting on all the little flying insects they could find. I never thought I’d be giving a message before a congregation, and be glad to have bats flying all around me!

The hall began to fill when we started, and the final count was that we had 55 people present for the study. Considering this was a work night, and some had to travel a distance on foot or by bicycle to get here, I felt it was a good turnout.

Michael will be at my hotel by 7:30 am to travel back to Kumasi. Joseph Amanfo, pastor Ofori’s son, has asked if he can ride with us as he also needs to go to Kumasi. We have room, so we’ll have one extra passenger for the trip.
Other Entries
-

Hi Mr. Clark -
Was curious if you can take beef jerky on your trips (especially homemade)? or is that something which would conflict with laws or cultural norms?