The trip from Yeji to Accra

-
Once again Michael was right on time. He had spent the night with one of the members, and thanked me for starting a little later than he normally starts with his taxi. He is normally up by 3:30 getting ready, and said this was the first full night's sleep he’s had in awhile!

Ofori Amanfo and his son, Joseph, were there as well

Greatly overloaded truck on the highway
. I didn’t realize it at first, but Ofori was saying goodby to his son for quite some time. Joseph, who is 20, has been accepted to a college of science and technology in I believe he said Chengdu. He was coming to Kumasi to spend a couple of weeks with his siblings who live there, and next month he flies out on Turkish Airlines to China. He will fly to Ankara, Turkey, then over the Ukraine and will land in Bejing. Then he’ll get a connecting flight out to Chendu.

I asked about the language issues, and he said he has one month after arrival to learn the basics of Mandarin Chinese for his classes. I’ve understood Mandarin to be one of the more difficult languages to learn, so this may prove quite a challenge for him. But I’ve got to give him credit for his gumption! For a young man who has never travelled outside of Ghana to take on a challenge like this, and move so far away and into a language he knows very little about is very brave. He promised to stay in touch with me, so I’ll hope to hear from him later on 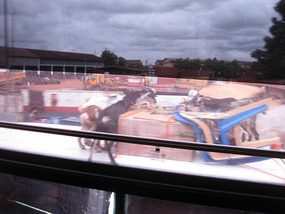 Goats tied to the top of a passing bus
description
.

The trip down to Kumasi was smooth. Michael delivered me to the VIP bus station which is in a constant state of barely controlled chaos. Reuel was also there to meet me as I had something to pass along to him. Then I boarded my bus (I was the last ticket sold for that one) and we were off.

We arrived at the bus station in Accra at about 5 pm. All the passengers getting off were immediately assaulted by taxi drivers asking if we needed a taxi. The young man who ran up to me assured me he knew exactly where my hotel was, so I accepted his price. It is normally a 10 – 15 minute drive, but at 5 pm I could expect a little longer. But I never expected what I got…

Perhaps I should have bailed from his taxi when he spent several minutes asking other drivers how to get to my hotel, but my stuff was already in, and I didn’t want to seem rude. We set off down into Accra, and in short order I was lost. He didn’t go the way we normally go, and we went into an area I was unfamiliar with. To make matters worse, traffic was in an absolute gridlock, so we were lost and going nowhere at all…

After an hour or edging our way along, we got free of some of the traffic, but we were no nearer the hotel than before. I finally called the hotel and the desk clerk gave him directions. We turned around and went another direction, finally ending up near a major road that I know – and that I know is NOT where we wanted to be! So we stopped and I called the hotel again. He turned around and started winding us up and around an entirely different neighborhood. It required a third call to the hotel before he was finally able to get me someplace I recognized, and I was able to direct him on in to the hotel. What should have been a 15+ minute trip ended up taking 1 hr and 40 min. I’m normally a fairly patient person, but I was at my limit for the day. I tried to very calmly suggest that in the future if he doesn’t know where a place is, just be honest and admit it. I’m sure that made no impact whatsoever. At least he didn’t ask for an increase in the price he had quoted me!

I’m looking forward to a good, comfortable night’s sleep tonight – which should be my last in Africa for this trip. Tomorrow I have one visit and an errand I need to run. The rest of the day I’ll have to work here in my room and prepare to head to the airport tomorrow evening for the flight back home!
Other Entries
-