-
As a young college student I was privileged to hear the famed explorer and motivational John Goddard give a presentation. Mr. Goddard, who died in 2013 at the age of 88, was famous for setting a series of 127 goals for his life at the age of 15. These goals included climbing Mount Everest and Mount Kilimanjaro, canoeing the entire length of the Congo and Nile rivers (and he was the first to do so on the Nile), learning to fly a plane, skydive, even marry and have a family – all of which he accomplished. Upon his death there were only 7 items he was never able to accomplish.

After his presentation he was open to some questions, and one of them was "Where do you call home?" Over 30 years later I still remember his response: “Home is where I wash my socks 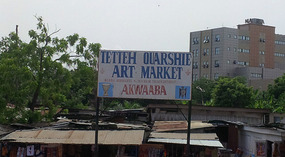 Entrance to the Tetteh Quarshie Art Market
.” There is certainly an element of truth in that we can make our home wherever we need to be, so long as we have the most important things with us.

The day after I arrived in Ghana for this trip the wife of one of our pastors greeted me and said “Welcome home!” I've spent enough time here that I am very comfortable with the people, the brethren, and I’m largely familiar with the customs and culture. And it is nice to be welcomed so warmly!

Thursday morning I was able to sleep in a little bit, and then after breakfast took care of a little work in my room. I had a visit scheduled for 11:00 am, and he was there right on time. After that I took a “walkabout” over to the Tetteh Quarshie Art Market to pick up a few things I had been asked to bring home. I’ve been there and brought groups there so many times that some of the shop owners now call me by name when I walk in.

Sadly, the shop of a very kindly and elderly Muslim gentleman I’ve visited every time was cleaned out and closed up. Another man I recognized told me the elderly man had died about a month ago. I’ll miss seeing him and chatting with him when I come here in the future.

I’ve learned a new word in Twi that has now been added to the Wikipedia dictionary: Dumsor, which is defined as “a popular Ghanaian word used to describe persistent electrical power outages.” You can find the entry at http://en.wikipedia.org/wiki/Dumsor. Literally it means “on and off, on and off”. It is sad that a word used to describe such a persistent problem has now gained such notoriety.

It is noteworthy that the power outages have sparked such consternation among Ghanaians that a public demonstration against the government is scheduled in Accra for this coming Saturday. One always hopes that such demonstrations will be peaceful, but with promise after promise from the government going unfulfilled, and more businesses laying off or closing their doors as a result, one never knows.

My driver taking me to the airport told me that Coca-Cola has a plant here in Accra, and because of the severe power problems, they have had to cut production, and as a result they have just announced the layoff of nearly 200 workers.

The state of the economy is reflected in the exchange rate in just the 10 days I’ve been here: on April 28th I changed money at a rate of 3.75. The hotel rate at that same point was 3.65. Today when I checked out I paid part of the bill in cedis I had remaining, and the rest in dollars. To figure the price we used the current hotel exchange rate which is now 3.90. That would mean there are places I could probably go today and find a rate of 4.0. That is an incredibly rapid decline, and not good news for confidence in the economy in Ghana.

In the afternoon I was able to get a little more work done before packing up for the trip home. The hotel had allowed me a late check-out, which was nice. Since I’ll have 24 hours on planes and in airports, being able to take a quick shower just before leaving will help. Plus, my walk over to the art market left me soaking wet, having sweated through everything. Without a shower I’m afraid I might have become a bit more “aromatic” by the time I reached home. You don’t want your wife to turn away from that first hug because of how you smell… J.

My flights and connections all went smoothly, and my final flight landed in Fort Smith just a few minutes ahead of schedule. There is nothing like walking down toward baggage claim and see your wife and son with broad smiles and open arms waiting for you! As much as I love the brethren in Ghana, and enjoy being able to serve there, as Dorothy said in the Wizard of Oz “There’s no place like home. There’s no place like home!”
Other Entries
-