-
Today is a day I will never forget. Today we visited two young people who are members of the United Church of God who have been sentenced to life imprisonment for being related to those who dealt with drug trafficking.

The story is far more than just being in prison 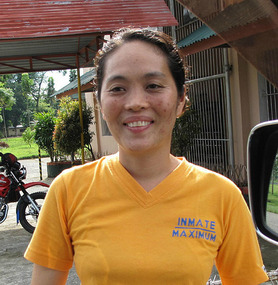 Lovely photo of Jed Sy
description
. It's a story of faith and hope and example of what Christians sometimes must endure because of the imperfections of man's government and justice. I will write more about these two people in separate web stories, but wanted to give a brief description of our visits and about them.

On December 31, 2004 a drug raid was done on Jed Sy's home. Her husband was involved in drug trafficking. The raid was done on New Year's eve so that that any gunfire would be masked as "fireworks." A fire fight ensued. Six were killed. Sy's husband was not among those killed and it is unknown what happened to him. It is felt that the police had caught up with him later and killed him. Jed, however, was seized and charged and sentenced to life imprisonment by a an extremely harsh administration in this part of the Philippines. She was not involved in her husband's activities. She had grown up in the Church, but married a Chinese man against the advice of her minister. They were married for four years and had a daughter Tin Tin who is now 12 and is cared for by a relative. Jed has now been imprisoned for nine years. Her case is under appeal, but those wheels of justice are turning excruciatingly slow. However, there have been hopeful signals that the appeal is "moving" forward.

Her brother Jong (Jingjong) was also arrested. He was charged only because he was a relative. In both their cases there was never evidence proving their guilt 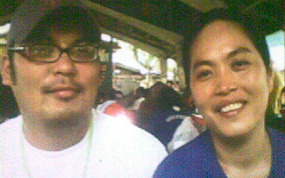 Jong and Jed - brother and sister
description
. This is not the United States where you are innocent until proved guilty. In this case they had to "prove" that they were innocent. Being married to and part of family was the overriding strike against them.

Today we visited both of them in two separate prisons about an hour / hour and a half outside of Davao.

The inspiring side of this story is the faith of both these people who live daily in hope of release and are waiting on God to deliver them. They have been the object of many of us in our prayers...and even more so as we get to know them and their situation better.

In each of their respective prisons both have risen to a position of respect and trust. Both manage other prisoners and provide hope and counsel for them. Jed by profession was CPA (certified public accountant). She is extremely competent and articulate. She likes to read and talk about life 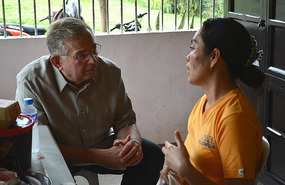 Jed Sy and me
. Earl Romer calls them both Joseph in Egypt when he was falsely imprisoned for an alleged relationship with Potiphar's wife. He sat there for months and months...he had risen to managerial status. He was ultimately freed and with the tempered character of patience, divine presence (in spite of the immediate situation) became a noted leader in Egypt. My hopes are that these two will be vindicated.

Jed poured out her heart about the state of her thoughts. I was greatly moved. I became angry at the injustice and how slowly this is being "sorted out." But, I"m confident it will. She was very hopeful. She had a few questions from the Bible.

She has been given amazing privileges as a life prisoner. She was able to come out of her compound and speak to us in an reception area. We brought lunch along and ate while we talked. Her roommate, a Muslim woman, came by and we spoke briefly to her. She's in prison for the same charge as Jed 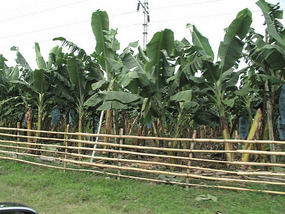 Endless banana plantations
description
. She would not eat as it is Ramadan, the 40 days of Muslim fasting and they can only eat at night. 80% of the drug traffickers are Muslims we were told.

What really struck me was the lack of deep bitterness about her state. She was hopeful, not hateful. It was a lesson to me about injustices that we feel should be resolved not on our timetable, but God's, Who has a purpose in our enduring injustice. Case in point is the injustice of having our church property, cattle and name stolen in Zambia and the perpetrators seemingly "getting away" with lies and theft. We must learn to be patient and realize that God is aware of the entire picture and we must learn that it's a trial that is to be endured so that we can live a life of patience, mercy and integrity.

While pictures were forbidden, it seemed like they were "allowed" today. There were four of s visiting Jed today: Ed Macaraeg, Roy Gilos, Earl Roemer and myself 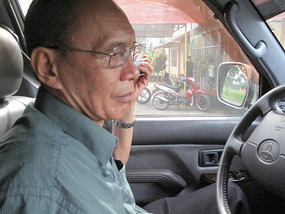 Our driver Ed Macaraeg
description
. Roy and I got some photos that we are sharing with you.

After our visit with Jed, we went on to the men's maximum security prison a few miles away. We drive through miles and miles of banana plantations. The prisons and the plantations are purposefully close as many of the inmates work the plantations. The bananas on the trees are in chemically treated sacks to protect them from pests and to make them look good for market.

The atmosphere here was far more austere. There are 5000 inmates between these two prisons. We were greeted by a sign in both English and Latin that read: The law is hard, but that is the law. That sets the tone of the atmosphere.

Jong is the manager of the 500 of the most maximally incarcerated inmates. He is greatly liked by the prisoners and management. When we walked into the prison to visit him, there was immediate positive recognition of him 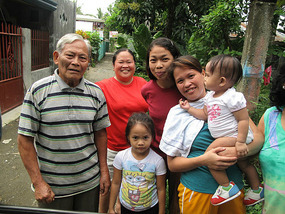 Family of Roy Gilos
description
. Because of a mix-up in visiting hours, we only had a little more than half an hour with him, but it was very enjoyable. He is very likable and engaging in conversation. He has been given great privileges including access to the Internet and his own Facebook page! I just asked him now to be my friend. He is even able to visit on occasion with his sister Jed Sy. This month has been hard for him as he was going through a bout of depression of the unending state of his state. He's "ok" now, but really cried out in desperation to God like David did in the Psalms: How LONG, Oh Lord!?

We were able to determine that both Jed and Jong could benefit with their personal laptops and LifeNets will provide on for each We're arranging for them to be purchased here in the Philippines, This will give them great encouragement as they can communicate with and be connected to the outside as they wait through their appeal process. 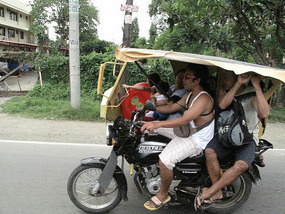 Up to 8 people ride these things....
description
. There is a separate congregation here that has about 30 in attendance. We talked about the possibility of providing a church structure here.

What a day! What more can I say. I'd like to post more on my Website at http://kubik.org about them and will when I get home.

From the prisons we drove back to the Macaraeg home where they prepared dinner for us. It was good to see their residence which had been the former Church Office before the office moved to the current facility in the heart of Davao. Lorna prepared a tasty meal. The high point for me was the Durian. You cannot have Durian anywhere because of the pungent odor that overtakes where it's opened. I wanted to see what all this about. Durian is called the Fruit of Kings. It is said to smell like hell, but taste like heaven.

So here we go.

The Durian was covered carefully with cellophane, It was carefully opened up and a piece put on my plate by Ed Macaraeg. Indeed it had a strong smell....and you eat it quickly so that you don't have to continue smelling it. Then an immediate transformation occurs. It melts in your mouth and experience and taste is similar to drinking eggnog. That may not be everyone's experience, but it was certainly mine. I was glad to go experience this Durian moment. I"m not even sure I'm spelling it right, but.will fix it on the blog when I get it right.

Ed Macaraeg took us back to the hotel. The heat wears you out and I was ready for bed on the earlier side.

What a memorable day!
Other Entries
-

Thank you, thank you, thank you for the update on Jed and her brother Jong. I would like to communicate with them either by snail mail or FB or whatever if that is possible. Please let me know how I can do this.

thank you for this update. its sad to hear they are still imprisoned, but it is good that they have responsibilities over people there.

Jed and Jong's story and their prison life and most especially the light that they emit are truly inspiring...

What a beautiful .The story is inspiring and It’s heart touching.. Tears come out when I read the lines . I pray God will protect and eventually set them free ... Our love and parayers ...
Thank you Victor for sharing .

I am so moved by Jed and Jongs patient example. They are truly inspiring. I will continue to pray for their freedom and for strength while waiting. Computers are such a good gift for them. Thank you for the update.