A Moving Trip to Corregidor Island

-
The cruise boat leaves the harbor at Manila Bay at 7 am. Rey Evasco and his wife Cynthia pick us up at the our Best Wester Antel Hotel about 6:15 and off to the dock we go.
I meet Abraham and Gracielle Joyce (Remo) Lorenzo 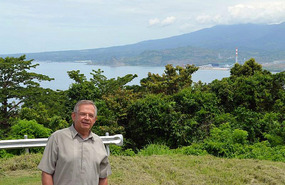 On Corregidor with Bataan in background
description
. He is the son of elder Benny Lorenzo and she is the daughter of elder Bong Remo. They were married July 4th. A delightful couple who shared the day with us.

Today is another day that had a great impact on me. I have heard of Corregidor, Bataan as part of my study of history from junior high school years. But, it's not until you see where these places are, their relationships one to another that you really get the kind of impact I got today. The history of savage conflict and suffering was heart-rending. In the end I had an old Spokesman Club tongue-twister run through my mind: Military malarkey makes monstrous madmen into maligned martyrs.

I will not recount the history of this island fortress, but it a 7 square kilometer rock in the strategic entrance to Manila Harbor and city of Manila. As the Japanese invaded Pearl Harbor on December 7th, they did so to the Philippines as well. Bataan, which is a province across the water from Corregidor fell 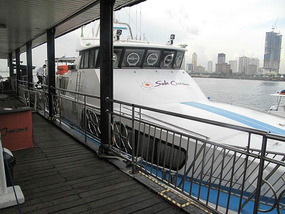 Cruise boat that took us out to Corregidor
description
...finally the Japanese took this armed fortress. General Douglas MacArthur under duress fled here in early 1942 before it fell for Australia and organized the retaking of the Philippines. He promised that "I shall return" which he indeed did do that on October 20, 1944 at Leyte as I had visited on Wednesday.

The entire day was spent on a guided tour of the island which was well done. I'll show you the tour in photos. You can read the details in history books. It's a monument to the senselessness of war and the havoc it wreaks on people's lives and underscored the biblical phrase in Isaiah and Romans "The way of peace they know not."

We arrived back in Manila about 4 pm. We all went out dinner with elders and leaders to the Manila Hotel for a wonderful evening of fellowship and great food.

Earl Roemer has organized this trip so well! Mostly, it's been shown in showing appreciation to the churches and leaders in the Philippians in the dinners and extra quality time spent in talking and getting to know each other better 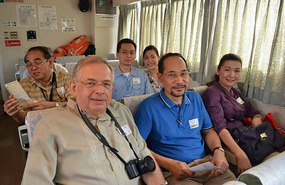 On the cruise boat to Corregidor
description
.

This was a beautiful evening as the Sabbath approached.....

In one of the comments to this post, a Filipino, Marino Bual, wrote the following.....which I would like to append since it contains the story of the fall of Corregidor:


On the night of 12 March, General MacArthur, his family, and several USAFFE staff officers left Corregidor for Mindanao aboard four PT boats commanded by Lieutenant Commander John D. Bulkeley. For this and a number of other feats over the course of four months and eight days, Bulkeley was awarded the Medal of Honor, the Navy Cross, the Distinguished Service Cross and other citations.MacArthur was eventually flown to Australia where he broadcast to the Filipino people his famous "I Shall Return" promise. MacArthur's departure marked the end of the USAFFE and by 22 March, the defending army was renamed United States Forces in the Philippines (USFIP) and Lt 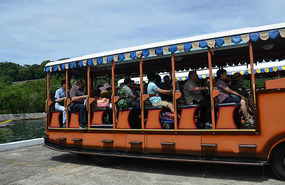 The tour of Corregidor
description
. Gen. Jonathan Mayhew Wainwright IV was placed in command.After the failure of their first attack against Bataan, the Japanese General Headquarters sent strong artillery forces to the Philippines in order to smash the American fortifications. They had 190 artillery pieces, which included bigger guns like 150 mm cannons or the rare Type 96 240 mm field howitzer, with Bataan being its only known campaign. The 1st Artillery Headquarters under Maj. Gen. Kineo Kitajima, who was a known authority on IJA artillery, also moved to the Philippines along with the main forces to command and control these artillery units. Also the Japanese High Command reinforced Gen. Homma's 14th Imperial Army and toward the end of March, the Japanese forces prepared for the final assault.On 3 April, the entire Orion-Bagac line was subjected to incessant bombings by 100 aircraft and artillery bombardment by 300 artillery pieces from 9:00 a.m. to 3:00 p 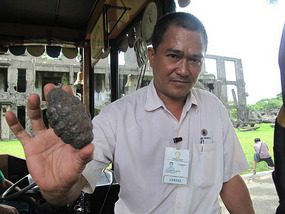 Tour guide shows grenade found
description
.m., which turned the Mount Samat stronghold into an inferno. Thereafter, over the course of the next three days (Good Friday to Easter Sunday, 1942), the Japanese 65th Brigade and 4th Division spearheaded the main attack at the left flank of II Corps. Everywhere along the line, the American and Filipino defenders were driven back by Japanese tanks and infantry.Based on his two prior attempts, General Homma had estimated that the final offensive would require a week to breach the Orion-Bagac line and a month to liquidate two final defense lines he believed had been prepared on Bataan. When the opening attack required just three days, he pushed his forces on 6 April to meet expected counterattacks headon. The Japanese launched a drive into the center, penetrated into flanks held by the 22nd and 23rd Regiments of the 21st Division, captured Mt. Samat and outflanked all of II Corps. Counterattacks by the U.S. Army and Philippine Scout regulars held in reserve were futile; only the 57th Infantry gained any ground, soon lost 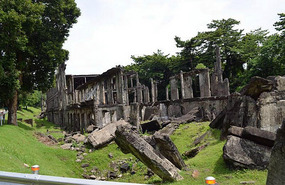 Corregidor barack ruins
description
.All along the battle front, units of I Corps together with devastated remnants of II Corps, crumbled and straggled to the rear. The commanders on Bataan lost all contact with their units except by runner in a few instances. In the last two days of the defense of Bataan, the entire Allied defense progressively disintegrated and collapsed, clogging all roads with refugees and fleeing troops. By 8 April, the senior U.S. commander on Bataan, Maj. Gen. Edward P. King, saw the futility of further resistance, and put forth proposals for capitulation.The next morning, 9 April 1942, Gen. King met with Maj. Gen. Kameichiro Nagano and after several hours of negotiations, the remaining weary, starving and emaciated American and Filipino defenders on the battle-swept Bataan peninsula surrendered.Radio Broadcast – Voice of Freedom – Malinta Tunnel – Corregidor – 9 April 1942:“ Bataan has fallen 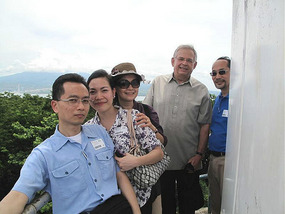 On top of the lighthouse
description
. The Philippine-American troops on this war-ravaged and bloodstained peninsula have laid down their arms. With heads bloody but unbowed, they have yielded to the superior force and numbers of the enemy.The world will long remember the epic struggle that Filipino and American soldiers put up in the jungle fastness and along the rugged coast of Bataan. They have stood up uncomplaining under the constant and grueling fire of the enemy for more than three months. Besieged on land and blockaded by sea, cut off from all sources of help in the Philippines and in America, the intrepid fighters have done all that human endurance could bear.For what sustained them through all these months of incessant battle was a force that was more than merely physical. It was the force of an unconquerable faith—something in the heart and soul that physical hardship and adversity could not destroy! It was the thought of native land and all that it holds most dear, the thought of freedom and dignity and pride in these most priceless of all our human prerogatives 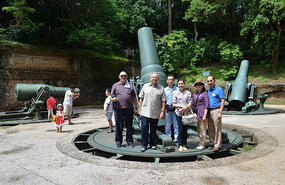 One of many big guns on the island
description
.The adversary, in the pride of his power and triumph, will credit our troops with nothing less than the courage and fortitude that his own troops have shown in battle. Our men have fought a brave and bitterly contested struggle. All the world will testify to the most superhuman endurance with which they stood up until the last in the face of overwhelming odds.But the decision had to come. Men fighting under the banner of unshakable faith are made of something more than flesh, but they are not made of impervious steel. The flesh must yield at last, endurance melts away, and the end of the battle must come.Bataan has fallen, but the spirit that made it stand—a beacon to all the liberty-loving peoples of the world—cannot fall!”Outcome and historical significanceThe surrender of Bataan would hasten the fall of Corregidor, a month later

Massive gun
description
. However, without this stand, the Japanese might have quickly overrun all of the U.S. bases in the Pacific.[6] Ultimately, more than 60,000 Filipino and 15,000 American prisoners of war were forced into the infamous Bataan Death March.The spirit that held up the faith and hope of the American and Filipino men and women in uniform under indescribable odds and conditions to make the stand (a beacon to all the liberty-loving peoples of the world ) saved Australia, which was the original objective, from the Japanese invasion. .