-
Today is our first full day in Singapore. We will be meeting at Rosalyn Yong's 25th story penthouse overlooking the sea.

With Grant and Kim, we spent the first part of the day at Gardens By the Bay 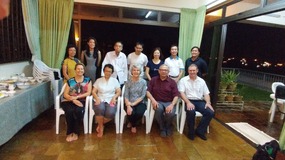 At Yong's
. What a wonderful place to go. It is a park that contains two huge domes. One is called the Flower Dome and the other is called the Cloud Dome. There is also a walkway 20 meters above the park on suspended walkway. The Cloud Dome was closed because of maintenance. So we just visited the Flower Dome which is a controlled environment botanical garden unlike any I’ve ever been to. I’m going to show a lot of pictures with this story showing the flora displayed. I wish I had my Canon 60-D with me…but I still got some nice photos.

We then walked the Skyway. Again, I’ll let the photos accompanying this post tell the story.

There is an unusual and spectacular hotel called Marina Bay Sands with what appears to be a ship on top. It is one the most expensive hotels ever built at 8 billion dollars.

Clerice picked us up at 6:20 pm as promised for the short drive to the high rise apartment where Rosalyn Yong lives 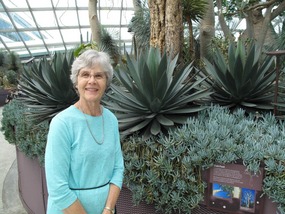 Flower Dome at Gardens by the Bay
. They live on the very top and have two stories. It’s very interesting. After entering we went up the steps to the second floor onto a large great room that led to a patio outside. They had grass on the patio and it was like a back yard in the United States. The view of the harbor is fabulous. You see dozens of ships in kind of a "parking lot" waiting for cargo. This is called the “Eastern Anchorage.”  Great view! A huge megaport is going is being built west of here.

The land on which the Yongs' apartment is built is reclaimed land from the sea. They have been buying fill from nearby Indonesia.

Rosalyn found out that her mother died at 5:15 pm…less than two hours before we arrived for the Bible Study. We offered to cancel, but she insisted that we carry on. Rosalyn was not there for the first part of the study. Her mother had been failing and this was imminent 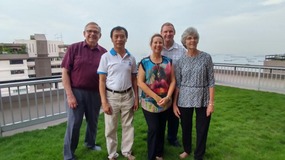 At Yong's
. But, one is still sobered by the death of a parent. Death is an enemy and there is never a right time to die for a loved one.

We first had a light meal and then people arrived. I was happy to see Clement Lim who calls me from time to time at the home office. We would have loved to spend more time touring and visiting, but we only have two full days here in Singapore. One was devoted for the Bible Study day and the other for a visit to Malaysia to visit a member, which we plan to do tomorrow. Clement and I talked for about half an hour before the Bible Study.

We met some wonderful people. Lilly, Carol and her husband Henry. Then Hone Gilos from the Philippines, his brother Roy is someone I have gotten to know. And a few others. Being mid-week not all were able to make it, but we still had a good visit with all.

Flower Dome at Gardens by the Bay
. Then I showed slides of the Australia conference last week as well as slides from two previous trips this year to Malawi, South Africa, Italy, Ukraine and the Netherlands.

Afterwards we got around a table in the patio area and enjoyed our conversation and the view. You can see the Indonesia coastline to the south. From this vantage point you can also see Malaysia. Singapore is 278 square miles with five and a half million people.

We also got to know the Yongs' son JJ and their daughter May who is a medical doctor. She is a ear, nose and throat specialist.

Bev and I really appreciated getting to know the Singapore brethren today!