To the Northwest Provinces!

-
Major and Felicia Talama along with their last-born 17-year-odf son picked us up at the Radisson Blu for Lusaka Airport at 9 am for the airport. We fly at 11:30 am to Ndola up in the Copperbelt. We enjoyed being with the Talama's and their family. It is not hard to become very attached to these people and quickly become part of their lives.

The flight to Ndola is about 40 minutes on Proflite 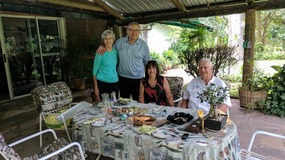 Pringles
description
. Proflite is probably the longest lasting and effective airline that Zambia has ever had. It is a regional airline that serves cities such as Ndola, Livingstone, Solweze and other outposts in the Texas-sized county of Zambia. They even have a flight supposedly to Lilongwe, Malawi. I saw it on a map, but not a schedule.

On our short flight we are given both potato chips (called "crisps" here) and Zambian ground nuts (peanuts) along with a drink. That's more than on US airlines.

In Ndola, Derrick and Cherry Pringle pick us up. It is hard to believe that it's been THREE years since we’ve seen them.

Off to their home which is about a 45 minute drive as we quickly get caught up personal news. They are dearest of friends and heroes in our minds about how they have served in the ministry here in Zambia. They truly CARE for the people they have been assigne to care for. Indeed, as Paul wrote in I Thessalonians about the brethren there: “But we were gentle among you, just as a nursing mother cherishes her own children 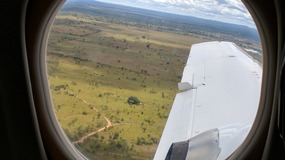 Pringles
description
. “So, affectionately longing for you, we were well pleased to impart to you not only the gospel of God, but also our own lives, because you had become dear to us. (1 Thessalonians 2:7-8). While lovable, the people in these parts of the world are not always the easiest to care for.

Off to their home and quick prep to take just the essentials for our four-hour drive to Solwezi in NW Zambia. Cherry prepares a nice lunch for us on their veranda which is the signature location for the Pringles. We pack only the essential items we need for the three-day journey.

We catch up on a lot of new since our visit here three years ago. Derrick runs a company called "Active Agencies" that constructs security fencing and has dozens of employees. He has clients throughout the Copperbelt Used to do quite a bit of fencing work up here.

Business has been slow of late as commodity copper prices have dropped sharply. But, the production has dropped further because the Zambian government greedily has placed a 75% tax on production above a certain level 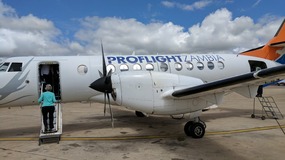 Pringles
description
. So, the mines produce only up to the 75% tax bracket level. This loss of production has caused many to lose their jobs. The mines say:  "why should we be giving all our revenue to the government?" As usual, in Africa, actions like this are not economic-savvy and people suffer unnecessarily. By they way, many of the mines are owned by Australians, Chinese and Swedes among others.

On the drive, we talk about the Solwezi church. It did not exist when we were here three years ago. So, where did they come from?

The church is composed largely of a group of people that have come over from the Seventh Day Baptists. They actually had a church building in Solwezi that they kept. Another similar group of former Seventh Day Baptists has done the same in the Congo not too many miles away.

The first of the people to come over was Alex and Christina Empomba. He has a brother Rodrick along with his wife Patricia Their parents, Justin and Yvonne Empomba are also in the congregation 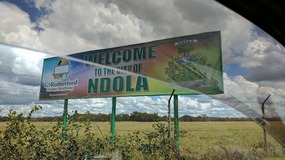 The leader of the congregation is Changa Changa. He is French-speaking, lives in Solwezi and is considered the father figure of this group and oversees it Changa Changa goes to the Congo once a month to help with the French-speaking congregation there. The local tribal language that is spoken here is Kaunde which I understand is also spoken in the Kasumbalesa, Congo congregation. This unites the people.

Beyond Solwezi there are two more United Church of God congregations. The next one about a hundred miles west is Mufumbwe where we visited three years ago. Then another 60 miles west almost on the Angola border is Manyinga. Mufumbwe has a hall that has been built with the help of LifeNets Australia. Manyinga is planning to construct a building and put in a bore hole, as well. The original person who came to understand the Truth was Horasi from the Manyinga area. I have written about his amazing story along with others on our website at http://lifenets 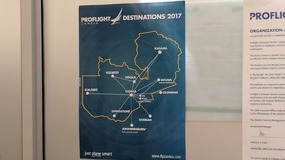 The drive out to Solwezi is not for the faint of heart. In short stretches the road is fine, but for much of the drive it is "under construction." Huge potholes pocket the road and the drive must be constantly aware of dangers that could literally destroy the vehicle. The road shoulders in places are non-existent and dropping off guarantees an overturned vehicle Tires and shock absorbers take a beating as Derrick skillfully steers the vehicle through ruts and potholes. And then makes up time on the straightaways. I admire Derrick and Cherry for using their own vehicles for this arduous journey. They do it about three times a year. It NOT easy.

We find our way to the Mutanda Lodge about 15 miles past Solwezi which has been pre-arranged. Even the chicken dinner in the open is pre-arranged. I love looking at the night sky
in the Southern Hemisphere as you can only see the Southern Cross here. The big dipper is just above the horizon and the stars of the Milky Way are strewn across the rest of the sky. Awesome!

The Pringles know how to live and relax. Before going down to dinner we have a few drinks and talk some more. With the Pringles we never run out of things to talk about. We are ooking forward to the Last Day of Unleavened Bread tomorrow and will bring you the report about tomorrow's activity.