-
Today we leave the Solwezi area back to Kitwe where Derrick and Cherry live. It's been exciting for us to be here. We are thankful to see all the people. We feel fortunate to be in good health and feel just great!

On the way from Matunda lodge, we stopped by another lodge that Derrick wanted to consider for a future time 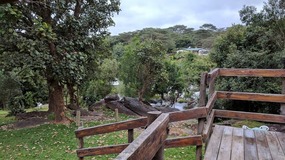 Mutanda Lodge
description
. It as called Georgie's Bar and Grill on the way to Mufumbwe and Kopombwe. Kopombwe is the name of the settlement where we stayed with the Pringle’s three years ago (it seems just like last year!) It was actually run by someone from New Zealand, I believe, who married a Zambian woman.

We were given a tour. The place is fabulous. It is on the same river as the other lodge and there was a rapids which always makes a place seem more exciting. The rooms were nice and some had overlooks over the river.

After this, we started back. There are few signs to places even like this guest house. People steal signs. If they’re metal, they take the material to make pots and pans. One thing that was mentioned was that in toilet stools the ball valve in the tank would be stolen and used by children as a ball to play with!

The road back is the same one we came on. We have to slow down drastically at spots where the road is barely navigable 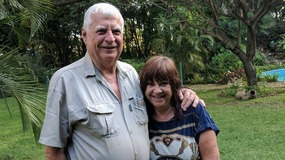 !!
description
. We are amused by the "go slow" signs. While on these stretches we are jostled back and forth in the SUV we are in.

At one point, we stop on the road to buy sugar cane. It is for the Pringle’s parrot called “Sparrow.” Sparrow is an amazing bird that repeats all kinds of things heard in their home. When at the Pringle's in the morning I get up early and sit, read, meditate and pray. In the quiet, I hear Sparrow repeat things that Derrick says under his breath. Then Cherry chimes in. It's like they're right there!

With the Pringle’s we spend a lot of time talking They will be leaving for two months to Australia and South Africa less than a week after we leave which is in two days. Derrick and Cherry will be coming for the Pastor’s Development Program in Cincinnati in early November for nearly two weeks. They will be staying with us and we look forward to this!

We arrive back in Kitwe at the Pringle’s. On their property, they have a little game reserve with water buck, bush buck, and antelope. They were hoping to get zebras, but there is not enough grazing for them.

Great to be back at the Pringle ranch in Kitwe.

Tomorrow, we will be meeting with the church people in Mufulira.