Meeting with Mufulira Church on Wednesday

-
Today we held a special mid-week service in Mufulira, almost an hour away. We have visited this congregation a number of times since 2011 and I was anxious to see how they were doing.

Even though is midweek, we are holding a traditional church services 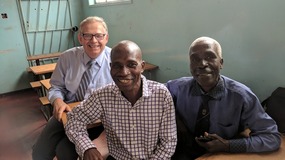 Vic, Sam Kasonga and Steven Kunda
description
. The church will pick up most of the people for meeting. It's a 28-seater Rosa bus that we bought the Church in 2011. Usually more than 28 people get on the bus. It is still riding in style and splendor, Derrick has it adorned in Church signage. He even changed references from "Good News" to "Beyond Today."  The bus goes out collecting people on the way to services, drops them off and goes out again beyond the church location for the rest of congregation. The process takes three hours before services and three hours after services. Derrick has one of his drivers who does this on the Sabbath.

As we arrive we are greeted by the 65 brethren singing a traditional greeting song. So many faces are familiar. Some are no longer here such as Jonathan Litaba who has moved to Lusaka and Benson who has died and Brown who is blind and can no longer attend. But, we see Rueben, Demas, Luckson and many others.

The church here has really grown and the people look better dressed. The classroom was nicely cleaned up for the service 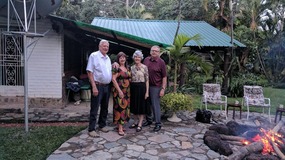 It was here in January 2011 where I first met the people from a much smaller group. It was at an extremely difficult time when the rogue leadership of the church tried to forcefully and unethically wrench away entire churches for themselves. They failed here as they had in most places, but the damage to people’s faith in leadership was shaken. We are back much stronger and better off for all that we had gone through. In the announcements, it was wonderful to hear about the Women’s Enrichment Weekend coming up at our Verino property outside Lusaka!

I gave a similar sermon to the one I gave in Solwezi a few days previously. At the end of services, we ordained Luckson Chongo as a deacon.

What ensued afterward was a fascinating discussion with San Kasonga and Steve Kunde. Sam lives in Kasumbalesa in the Democratic Republic of the Congo. He comes down to the Mufulira congregation from time to time through Chongola and then catches a ride to Mufulira 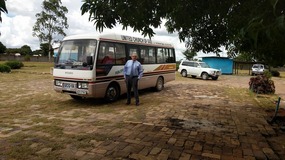 Church bus
description
. Steve Kunde, is a member of the Mufulira congregation. He speaks French and helps out in the Kasumbalesa congregation once a month with Chonga Chonga, our deacon in Solwezi. They meet up in Chongola and then go together across the border.

How did this connection with the Congo come about? Sam Kasonga met a Mr. Kapia, a UCG member in Kitwe in 2014. Sam had been a Seventh Day Baptist who came to understand the keeping of the Holy Days. So, he took an interest in the United Church of God in Zambia. He leads the congregation in Kasumbelesa and takes care of 80 orphans. I've previously discussed the orphan situation in my post on April 17 from Solwezi, but here are few of the pertinent points again:

Sam Kasongo cares for about 80 orphans scattered throughout Kasumlabesa. He feeds them one meal a day which is about all they get. The orphans have been brought down to this safer part of the Congo from the northeast where fighting and terrible atrocities continue to this day 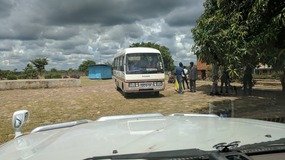 Church bus
description
. One town up north that was mentioned was Goma which is on the border of Rwanda. Rebels are fighting government forces and it’s all about access to diamonds, gold and other minerals in the area. People are continually getting killed in the crossfire and that’s where you get the orphans. From what we heard, the presence of the United Nations has been a failure in this area.

We are working on getting more miele meal to the orphans. The cost is double in the Congo ($30 per 25 kg bag). It’s $15 per bag in the Zambia. But, in order to "export” it, meaning take it across the border you need to buy a permit for $600. And, then, the permit is good for only six months.

Sam speaks French and marginal English. He met Chonga Chonga in Solwezi for the first time after he found out about the new congregation there. He's been meeting more and more of our people.

He asked for a camera so he could take some photos

Church bus
description
. Also, there is a need for French Bibles. They are extremely expensive in the Congo: $45 apiece. So, I'll be getting on that right away.

At our meeting we gave him money for some construction and for feeding the orphans in Kasumbalesa.

Our conversation was enlightening and historic in my view. We hope to be able to help more. We never know when we will see each other again. Good conversation with Sam Kasongo and Steve Kunde. By, the way, Steve Kunda's wife Margaret sang special music and was baptized on the Sabbath after the meeting we had on this day.

After services we fellowshipped and there were a few counsellings for baptism.

Then, we traveled the one hour back to Kitwe.

We made a fire outside in a fire pit. Enjoyed a delicious meal outside as the night wore on. Tomorrow back to the USA!
Other Entries
-