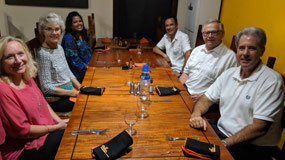 The six of us for dinner
This is the first day of reporting the Sri Lanka/India part of our trip.  You can go back a few days and see the entries that summarize the overview of this trip that goes back to Panama City Beach from which we just arrived.
On Thursday evening, October 4, we had dinner with Frank and Tina Reckerman, deacon in the Colombo congregation as well as India/Sri Lanka senior pastor David and Jolinda Schreiber. What a wonderful evening of sharing and learning about the people here in Sri Lanka as well as the Church.  There is no better way to get to know and understand people than to travel and visit with them face to face.
After a long two night trip, we got situated at the Ramada Inn in Colombo and went to dinner at the Sizzler restaurant about ten minutes away in the heart of Colombo.  The city has a population of five million people.  The nation of Sri Lanka, which is a large island, has 27 million inhabitants.
Traffic in the city center is very congested, yet everyone seems to get in and through where they want to.

Central Colombo
The constant din of car honking is every present and noted.
Frank and Tina Reckerman were in for UCG’s Labor Day weekend Leadership Workshop in 2017, so we were somewhat acquainted with them.  He is an accountant by profession. He oversees a congregation of about 40 or so here in Colombo.  We are very interested in meeting with the entire congregation this coming Sabbath.
All six of us crowded in his small car with Frank and me up front and the other four in the back seat. We made it all right.
The restaurant looks quite plain from the outside, but what a wonderful experience and evening was to follow.
All the dishes (and the menu was quite extensive) are served on searing hot metal platters.  Steam rises from the food and is quite dramatic and impressive.  Our waiter’s name was Victor and he displayed a sign on the table that said: Served by Captain Victor."  We took a picture of Captain Victor and President Victor.
The conversation focused on the completed Feast of Tabernacles which was held a seven-hour bus ride away on the east coast of Sri Lanka. 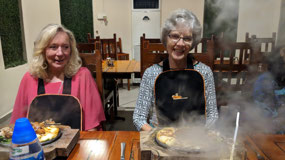 Jolinda and Bev ready to eat
Seventy people were at the Feast and came from Australia, US, UK, Ireland and Canada. Jamie and Kayleen Schreiber came from Cincinnati. There were plenty of speakers and the Feast was full of activities.  The most noted event was Family Day and playing Cricket by both young and old, men and women.  It’s a game I just don’t get. I’ll have to watch a tutorial on it.  It seems like an endless game with an extremely hard ball thrown fast by a “bowler” (I think) at a batter. The batter swings a bat and the ball can go any which way. Then everybody runs back and forth.  Then they stop.  I don’t know any more than that.  They talked about all the wonderful things that were available for the kids.
At dinner one of the topics of discussion was the direction and leadership in the Colombo congregation.  I look forward to meeting everyone.  This is a very mature and serious group of people who are properly motivated by Christian values and action.
After dinner we were brought back to the Ramada and sat and talked in the lobby for about half an hour about church administrative matters.  As I was dozing off, it became apparent that we needed to get to bed.  The last bed we slept in was in Panama City beach two nights back. Great day!
Other Entries
- 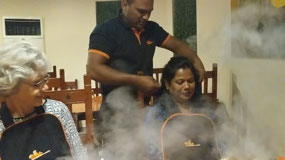 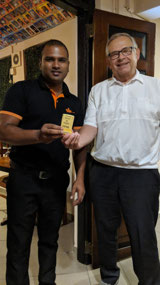 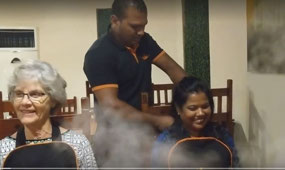 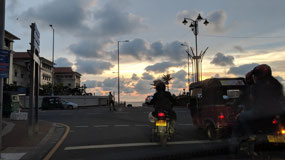 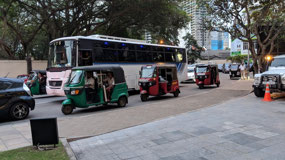 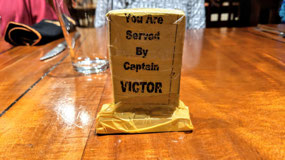 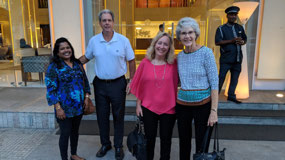 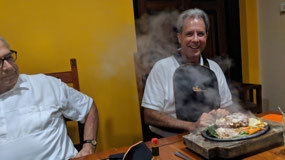 Thanks for you blog Vic, Look forward to your entries and insight in to our brethren’s lives...

Very interested in your travels! Thankful you take the time to write! Makes it easy to pray that you are safe while traveling and spreading God’s word!

Thanks for your update and safe travels - Love to the brethren. Vic - you definitely need to learn more about such a national sport as cricket. :-)

It’s just so wonderful that you and Beverly traveled all that way to visit with our brethren in Colombo, Sri Lanka. They would have really appreciated that.

Fantastic photos...i so enjoy your travels and the wonderful work you and Bev do. God Bless!