-
Today was our day visiting with people who are from UCG and similar groups.

Singapore
We really enjoyed all the visits with some people that we had known from previous visits. The people we visited were those that we had not seen the day previously at our meeting at Rosalind’s home.
The first stop was Anita’s apartment. We would have seen Anita yesterday, but she just had surgery on her shoulder and that’s why missed her.  The conversation among us was very animated with lots of stories and laughter. They had a nice table with snacks and drinks that we had not seen before. Everything is so interesting and discovering what people say, do and eat is fascinating—to me, at least.
We had seen Arthur 3 and a half years previously. He had gone on our day-long visit to Malaysia to see members with us.
Another person that I talked to a lot was Lilly. She has been a member since 1977.   Another person present was Angie who is Anita’s younger sister. Also, there was a young lady from Indonesia who worked in the home. They lived on about the 8th floor of a high rise. Lots of high rises here.
From here we continued our journey, with Rosalind driving, to the home Clement Lim.

With Lillian and Anita in Singapore
At this point Henry Chin picked up the transport. We visited with Clement for an hour in his garden, so to speak. He is a very interesting man with a history going back to when he lived in London. He has an interesting history working in media and news. He actually became a member while living in London in the mid-sixties.
Singapore is quite diverse. It is 16% Christian and about the same Muslim. The Muslim population is growing faster than the Christian population. Then, it’s about 35% Buddhist and the rest various. They all seem to get along. In Henry’s neighborhood, there were various temples, madrasas and maybe even churches (can’t remember). But it was very diverse. We took a stroll down the street and saw the various places.
Then Henry Chin came by and took us around Singapore. I wanted to get a feel of the area and the scope of the city. We were not expecting a thorough tour, but Henry had outlined a route that took us from the eastern side of Singapore to the western coast, then up the coast to the Malaysian border, then down through the center of town where we saw the American School. 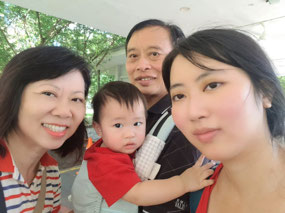 The Henry Chen family Carol, Decklen, Henry,Sarah
It was all very remarkable. Singapore is an ultra-clean city. There are no slums. It is illegal to sell gum in the city because they don’t want people spitting it out on the street. There are harsh penalties (death) for narcotic possession.
We stopped for lunch at a shopping mall. There were so many restaurants. They say the most people in Singapore eat out. They say it’s cheaper than eating at home. The restaurants there ranged from Subway to McDonald’s, but I wanted to try something Oriental. We finally settled on a Korean place called Dookies. It was an experience, at least for me.
You could have things prepared, or you could cook it yourself. I wanted to do it like the people do it here and “cook” it myself. I saw people pouring in vegetables, meats, tofu…all kinds of things into a bowl with bubbling something or other. Then they watched it cook.
I went and picked out pieces of chicken that looked like lunch meat and hot dogs. Poor choice. I put it all into the bubbling hot liquid.

At Anita's apartment....
description
I also took a piece of fried chicken separately. I should have stayed with that. The pot cooked and cooked. Finally, I felt that it was time to “eat” it.  My cooking was done wrong, very wrong. Things were bland and half cooked. The chicken tasted terrible and it was my fault, no one elses. Then on the wall there was a sign warning about NOT eating what you had on your plate. It was sign decrying food wastage. A $10 penalty would be assessed for uneaten food. I was stuck. So, I slowly tried to “savor” the meal got through it.  I went and got condiments to make it taste better.  I avoided the fine.
There was a drink called "Fun" Cola. Also, a dessert-making machine that created ice shavings that you could add flavors to.
That was my Korean experience... I don’t do well with Korean cooking!
We continued on our journey. I thought that we had gotten the feeling of Singapore which area-wise is twice the size of Manhattan. Henry Chin, our driver, is a gracious man who so much wanted us to have a pleasant experience of Singapore. We drove by the harbor and drove by a huge Chinese cruise ship. Also, we saw a desalinization plant. Now, Singapore gets a lot of its water from neighboring Malaysia, but is going to have to develop it’s own water supplies.
We drove by American Schools, which was very interesting. I thought we were headed back to the hotel, but Henry drove us north to the frontier with Malaysia. We finally got back to our hotel.
This is the jist of our Sunday. The most wonderful part was spending time with all the people that we visited throughout the day. We thank Henry Chin for taking care of us today.
Other Entries
- 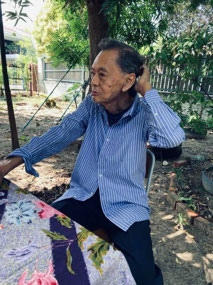 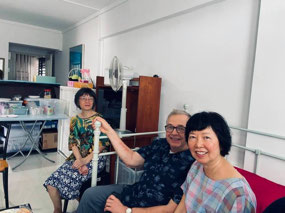 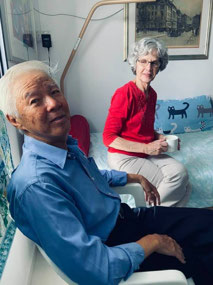 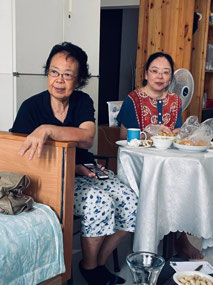 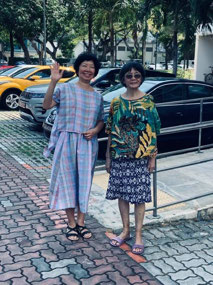 Thank you. I am truly e joying all the pictures and your telling us.

Wow! I had to look up Jainism...I am sure I studied about that briefly in High School? Thank God for His absolute and wonderful TRUTH!!! Thank you so much for the lovely pictures. I enjoy reading about the travels and hearing about our brothers and sisters in various parts of the world. I know that your trip blessed them so much and vice versa.