-
We checked out of the Alejandro Hotel at 7 am and headed left shortly after that for the country to the towns of Abuyog and Macarthur. We drove out more than an hour to visit some of the other homes that were rebuilt. I was VERY IMPRESSED with work has been done and how the outcomes were new dwelling for several families. As mentioned, six homes have been rebuilt and seven roofs replaced from Haiyan. We have told some of this story on the LifeNets website at http://lifenets.org/typhoon2013/

The first stop was in the town of Abuyog, the Felix and Dorie de Paz home 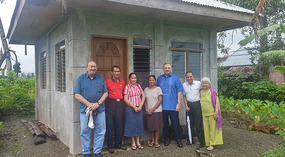 de Paz home
description
. The construction work done is of high quality. The homes are built of concrete block. this is a great improvement over the wood structure that cannot withstand the vicious winds of typhoons. When Aaron Dean visited here he helped work on this home while visiting.

The de Paz's lost their home and we built on a new one a few miles away in the midst of verdant rice fields. With all the water, I wondered if they had a problem with malaria. Not malaria, but sometimes they come down with dengue fever.

From Abuyog we backtracked towards Macarthur. We stopped at the first house that was rebuilt. It is for the Misigal family. Gerald is a member and lives here with with parents Diomede and Lourdes. His sister and her husband live in a room that has been built next to the home. Again, it was so good to see the solid concrete construction that should withstand strong winds. 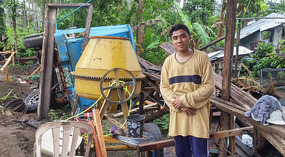 Ian Leria at work
description
. The elder in Macarthur is Jose Campos. His wife is Deodita. One of his sons is Reuel whose wife is Meryl (Macaraeg). He also has a daughter Kerin married to Ben John Tagoyan.

Jose Campos' home destroyed in the storm. The whole second floor was ripped off and they decided to rebuild from the start. This is the last of the houses that LifeNets/Good Works is constructing. We saw the construction workers. One of them is Ian Leria from Tacloban. Another is a member who came up from Mindinao. It will be about 3-4 months before this project is finished.

Jose and Deodita live in the church hall on which UCG has a five year lease. It is only about a hundred feet away.

We then had to leave for the Tacloban airport. It is raining. I need to fly to Manila and on to Hong Kong. Then in the morning fly to Los Angeles and Cincinnati. Larry Darden was not able to be with us as his flight was earlier through Taipei, Taiwan 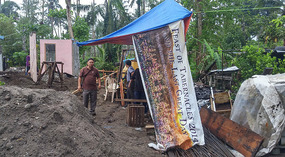 We came to the airport where we said good-bye to Raul, Marita and James Villacote. They have been most gracious and kind to us. A wonderful visit with them. Marita and James are Facebook friends, so we're in contact with one another.

The flight was slightly late to Manila, but I have plenty of transfer time there. We said good-bye to Ed and Lorna Macaraeg and Earl and I went to Kenny Rogers chicken at the airport after I checked in for my flight to Hong Kong. Mr. Macaraeg's mother has beenin a coma and he was picked up by his son-in-law Bong Remo and stayed there inthe south side of Manila.
The flight was to leave at 8:55 pm and arrive in Hong Kong at 11:10 PM....already on the late side. It was two hours late because of mechanical problems, but we did get off the ground after 11 pm and arrived in Hong Kong at 1:15 am.

My hotel was "near" the airport

Misigal home
description
. I tried to find out how to get there as I figured the shuttle stopped running. The few maintenance people in the airport were very unclear to me in their directions, but kept pointing in one direction. i did not know the meaning of that. After wandering in hallways and passages for about 20 minutes I found the taxi stand and was about get a taxi. But, not to worry....I looked up and the Regal Hotel was across the street! It indeed was NEAR.

It felt so good to check in and get about four hours sleep. From there it was a five minute walk to departures. I already had my boarding pass for the 12 hour flight from Hong Kong to Los Angeles.