-
Next stop was off to Mursi tribe. We were told that it was ok to take photos but when we picked up the local scout to put away our cameras. The Mursi were known to be very aggressive.

So this is my written account of the first encounter with the Mursi tribe. 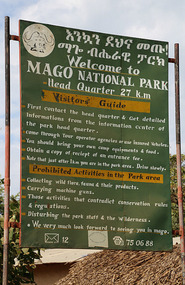 .
Arriving at the campsite next to the Mursi village we were greeted by these very tall dark skin Mursi men. How elegant they looked.

After we got out and greeted each of the males each with their long sticks. Some were barefooted and others had simple leather thongs. The men sat on a log with interest and watched us as we unloaded.

I suppose with some trepidation we went and greeted them in their village. Quickly my own little bit of uncertainty vanished. They were going about the day to day life. Once they saw we had no cameras it was fine. Saying "Achalie" or a greeting and shaking their hand throughout the encounter trying to communicate became interesting. Things like saying ones name then they would say theirs, or determining how many children they had involved a lot of finger gestures.

The ladies both young and old were kneeing and grinding their sorghum grain into the fine flour. Any signs of western influences in the village itself?

I don't know how they being so tall could enter into their round huts as the door was so low.

Besides the multi coloured Crocs not really, a few had western clothes (pants) on but most still wore a cloth.

Several of the children wore either green or orange or blue football outfits.

Later a few had torches.

Their hair were finely braided and many had intricate fine patterns. Many had their lower forearm or ankles lined with rows of silver or brass bracelets.

A simple beaded necklace adorned many of them.

Ear lobes with large rings in them and many of the ladies had lip plates. Babies were carried on their backs.

Like other villages we had been to, some of the children asked for a pencil or pen and several little children were asking for candy in their local language. We were advised not to give any to them.

The small fires were lit and in pots of the local tree vegetables were boiling away. Also the sorghum was being cooked into a porridge. They are really self-sufficient for all their food, milk and meat from the goats, grain and other crops. This tribes is no longer nomadic as with the clear flowing river as their water supply, their huts were well established.

A few dogs were around.

A school, clinic and mission were nearby.

One 16 year old boy we met later by the river told us that he had been learning English for 2 years now and was in grade 7 at the local school. His subjects were what I call the basic sciences: chemistry, biology, mathematics, 3 languages English, Amharic, and of course their local tongue. His spoken English was excellent for just 2 years. Another lady who had her baby on her back was carrying a bottle of antibiotics. By gesturing it was for her baby.

I have been fortunate to have experienced a few tribal encounters but this one certainly exceeded all of my previous experiences.

I can understand why the Ethiopians clock is from 6 am to 6 pm. This follows the sun. Being so close to the equator it doesn't change much. In the 4 x 4 the clock is set to this time. If it has 3:00, it is really 9:00. Just add 6 hours. Quite simple.

Dinner under a single low wattage bulb hooked up to the 4x4 battery was vegetable soup followed by spaghetti, cabbage and carrot cooked over 2 single gas burners. Banana and passion fruit followed. I saw fire flies for the first time as they flickered around.

As John had his own tent, I was fortunate to end up with my own smaller 2 person tent. The sleeping bag that Fekadu provided became my pillow and all I needed was my sleeping sheet. It wasn't cold even in the morning.

The evening sounds reminded me of Botswana's Okavango Delta - the frogs and crickets.

The Mursi (or Mun as they refer to themselves) are a Nilotic pastoralist ethnic group in the Ethiopian Empire. They principally reside in the Debub Omo Zone of the Southern Nations, Nationalities, and People's Region, close to the border with South Sudan. According to the 2007 national census, there are 7,500 Mursi, 448 of whom live in urban areas; of the total number, 92.25% live in the Southern Nations, Nationalities, and People's Region (SNNPR).

Surrounded by mountains between the Omo River and its tributary the Mago, the home of the Mursi is one of the most isolated regions of the country. Their neighbors include the Aari, the Banna, the Bodi, the Karo, the Kwegu, the Nyangatom and the Suri. They are grouped together with the Me'en and Suri by the Ethiopian government under the name Surma.

Like many agro-pastoralists in East Africa, the Mursi experience a force greater than themselves, which they call Tumwi. This is usually located in the Sky, although sometimes Tumwi manifests itself as a thing of the sky (ahi a tumwin), such as a rainbow or a bird. The principal religious and ritual office in the society is that of Kômoru, or Priest. This is an inherited office, unlike the more informal political role of the Jalaba. The Priest embodies in his person the well-being of the group as a whole and acts as a means of communication between the community and God (Tumwi), especially when it is threatened by such events as drought, crop pests and disease. His role is characterized by the performance of public rituals to bring rain, to protect men, cattle and crops from disease, to ward off threatened attacks from other tribes, to safeguard the fertility of the soil, of men and of the cattle. Ideally, in order to preserve this link between the people and God, the Priest should not leave Mursiland or even his local group (bhuran). One clan in particular, Komortê, is considered to be, par excellence, the priestly clan, but there are priestly families in two other clans, namely Garikuli and Bumai.

The religion of the Mursi people is classified as Animism, although there is a Serving in Mission Station in the northeastern corner of Mursiland, which provides education, basic medical care and instruction in Christianity.

The Mursi undergo various rites of passage, educational or disciplinary processes. Lip plates are a well known aspect of the Mursi and Surma, who are probably the last groups in Africa amongst whom it is still the norm for women to wear large pottery or wooden discs, or 'plates,’ in their lower lips. Girls' lips are pierced at the age of 15 or 16. Occasionally lip plates are worn to a dance by unmarried women, and increasingly they are worn to attract tourists in order to earn some extra money.

Ceremonial duelling (thagine), a form of ritualised male violence, is a highly valued and popular activity of Mursi men, especially unmarried men, and a key marker of Mursi identity. Age sets are an important political feature, where men are formed into named "age sets" and pass through a number of "age grades" during the course of their lives; married women have the same age grade status as their husbands. Thanks Mr Wikipedia.

From www.mursi.org - The Mursi, Chai and Tirma are probably the last groups in Africa amongst whom it is still the norm for women to wear large pottery or wooden discs or ‘plates’ in their lower lips. The lip-plate (dhebi a tugoin) has become the chief visible distinguishing characteristic of the Mursi and made them a prime attraction for tourists.

A girl’s lower lip is cut, by her mother or by another woman of her settlement, when she reaches the age of 15 or 16. The cut is held open by a wooden plug until the wound heals. It appears to be up to the individual girl to decide how far to stretch the lip, by inserting progressively larger plugs over a period of several months. Some, but by no means all, girls persevere until their lips can take plates of 12 centimetres or more in diameter.

It is often claimed that the size of the lip plate is correlated with the size of a woman’s bride wealth. This is not born out by the fact that the marriages of many girls have already been arranged, and the amount of bride wealth to be paid by their husbands’ families has already been decided, before their lips are cut.

Another common idea is that the practice of cutting and stretching the lower lip originated as a deliberate disfigurement, designed to make women and girls less attractive to slave traders. This ignores the fact that the Mursi themselves do not give such an historical explanation and that the practice is confined neither to Africa nor to women.

Amongst the Kayapo of Brazil, for example, senior men wear a saucer-like disc, some six centimetres across, in the lower lip (Turner, 1980). Like other forms of body decoration and alteration found the world over (like ear piercing, tattooing, and circumcision), the lip plate worn by Mursi women is best seen as an expression of social adulthood and reproductive potential. It is a kind of ‘bridge’ between the individual and society - between the biological ‘self’ and the social ‘self’. http://www.mursi.org/introducing-the-mursi/Body%20Art/lip-plates